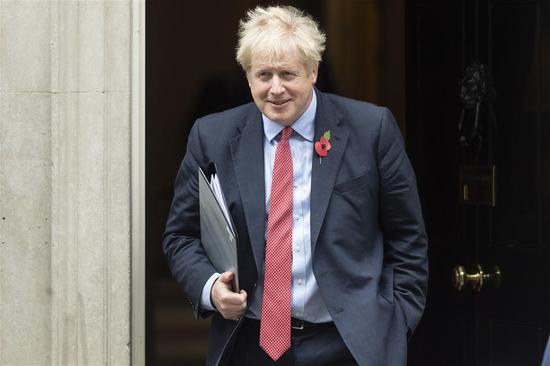 Britain's House of Commons voted on Tuesday night for a snap general election on Dec. 12, which is set to send the country to go to the polls for the first time in December in nearly 100 years.

More than 46 million people in England, Scotland, Wales and Northern Ireland will take part in what will be the first December parliamentary election since 1923.

A bill to pave the way for the election won by a vote of 438 to 20 after a day-long debate in the House of Commons with lawmakers backing British Prime Minister Boris Johnson's call for an election.

Johnson called for a Dec. 12 polling day, but an opposition Labour amendment wanted to bring election day forward to Dec. 9.

Labour lost their bid by 295 votes against 315, a major victory for Johnson, who has suffered repeated defeats in the House of Commons over his Brexit efforts since taking office in July.

Although the bill will have to be taken through the House of Lords this week, and given Royal Assent by Queen Elizabeth before it becomes law, its rapid passage through the Commons means there will be no further obstacles.

Opposition MPs had also put forward amendments intended to give a vote to 3.4 million European Union (EU) citizens living in Britain, as well as lowering the voting age from 18 to 16 to let several million more youngsters have a say.

Deputy speaker of the Commons Lindsay Hoyle rejected both amendments.

A number of media outlets in London said Johnson had been prepared to scrap the election plan altogether if either of those amendments had been agreed.

Hoyle did accept the defeated amendment by Labour MP Cat Smith wanting to change the date of the election from Johnson's preferred Dec. 12 to Dec. 9.

Most national elections in Britain traditionally take place on Thursdays in May.

Parliament will close its doors in the middle of next week to pave the way for nationwide electioneering.

The general election is expected to focus mainly on Johnson's Brexit deal to end Britain's membership of the European Union on Jan. 31, or earlier if the new parliament backs the EU withdrawal legislation.

His bid for Brexit will come up against opposition party demands for a second referendum or scrapping Brexit altogether.

Elections expert John Curtice from the University of Strathclyde told London radio station LBC on Tuesday that the election is "one Boris Johnson has to win."

"The safest prediction is that we will have a record number of non-Conservative and non-Labour MPs in this parliament," said Curtice.

He said the Scottish National Party (SNP) is likely to win the vast majority of seats in Scotland while the minority Liberal Democrats are expected to do extremely well.

It could mean more than 100 MPs in the new parliament not belonging to either the Conservative Party or the Labour Party.

Curtice said, "If he (Johnson) does not get a majority or something very close to it, he will not be able to stay in government because the Conservatives do not have any friends elsewhere."

The Daily Telegraph newspaper commented Tuesday that a general election on a damp December day could actually be a boon for the Conservatives and see them returned to government with a majority.

If those re-admitted rebels are added to the parliamentary headcount, it would give Johnson's governing Conservatives 298 of the 650 MPs. Labour has 244, the Scottish National Party (SNP) 35, the Liberal Democrats 19 and the Northern Ireland-based Democratic Unionist Party (DUP) 10.