Remove 'scars' of Hong Kong to heal wounds of violence 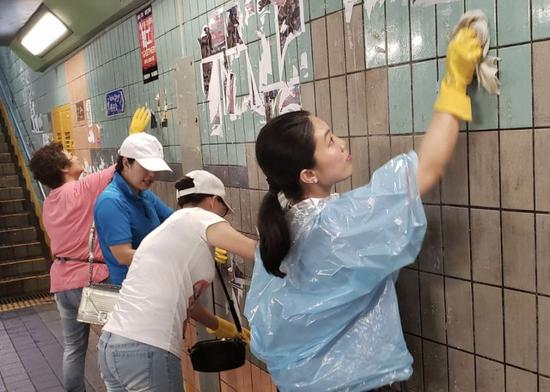 Volunteers scrub away posters in a tunnel in Hong Kong on Aug. 17. (Xinhua)

When residents go out the next morning, however, they will find few traces of the tumultuous nights on the streets. A group of volunteers known as the scar removers are among the many people who have contributed to the rapid tidying-up of the ravaged streets.

"As residents of Hong Kong, we feel obliged to do something when we see rioting bring chaos to our city," said dance teacher Michelle Au Yeung, also the volunteer who brought together the scar removers.

Near the entrance of Wan Chai metro station, large blocks of slogans sprawled on a wall. To Au Yeung, these are like scars of Hong Kong, constantly reminding people of the chaotic and violent riots.

"By removing those 'scars' of Hong Kong, we are also healing the wounds violence inflicted on people's hearts," she said.

By the dawn of Monday, a night of massive violence had finally quieted down on the streets of Hong Kong. Au Yeung and about two dozen scar removers were busy cleaning up the mess rioters left in downtown Wan Chai area.

The volunteers, each holding a bucket with wipes and detergents inside, bustled around to scrape off provocative slogans and clean up the streets.

"Most of the people around me don't agree with rioting and violence, but many feel intimidated and wouldn't speak out, let alone take actions," Au Yeung said.

The scar removers hope to set an example for more residents to take actions to restore peace and stability in Hong Kong. They also hope their actions could trigger reflection in violent protesters so that some of them might stop hurting their hometown.

Au Yeung had only a few friends with her when she started cleaning-up action since July. More people offered to join them after seeing them on the streets. The number of scar removers grew day by day.

As they labour on the streets, many people went to them to praise their good work and offer support. "Hong Kong is known to be clean and tidy. Residents of Hong Kong won't allow radicals to ruin it," Au Yeung said.