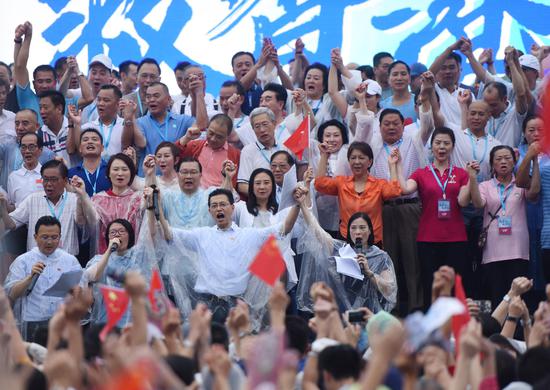 People from all walks of life take part in a rally to voice their opposition to violence and call for restoring social order, expressing the people's common will to protect and save the city at Tamar Park in south China's Hong Kong, Aug. 17, 2019. (Xinhua/Wang Shen)

The perception of millions of young people in the Chinese mainland is that the young generation should not be incited by foreign forces and rabble-rousers in Hong Kong.

"I can't believe what happened in Hong Kong. How can some people insult the state dignity and hurt the feelings of the entire Chinese people, including Hong Kong compatriots like that?" Zhou said.

He added that without the motherland in heart, a person is nothing no matter how great the achievements he has made.

Pang Xiaoming, a 30-year-old worker in a state-owned company in southwest China's Chongqing Municipality, said that the symposium on the situation in Hong Kong held recently had sent strong signals that there is no tolerance for acts challenging the "one country, two systems" principle.

"We are all concerned about what happened in Hong Kong. Unreasonable violence has caused absolutely devastating damage and harm," said Lei Qingzi, a student leader from Jiangnan University in east China's Jiangsu Province.

Lei also called for cooperation between young people in the Chinese mainland and Hong Kong to build Hong Kong into a better place and boost the development of China.

Calls for stability, calmness and restoring social order are not just the demands of Hong Kong people. They are also demands of the young people in the Chinese mainland.

Yang Zhong'erjia, a young policeman who is attending the World Police and Fire Games in Chengdu, southwest China's Sichuan Province, has just finished a basketball game with police representatives from Hong Kong.

He said that the audience at the event hailed the police of Hong Kong when they entered the basketball court.

"As a police officer in the Chinese mainland, we firmly support the HKSAR government in exercising administration in accordance with the law and support Hong Kong police to strictly enforce the law and safeguard the dignity of the rule of law," he said.

Development is the key to solving problems in Hong Kong. The individuals will better achieve self-development with the progress of the country and the city.

Hong Kong has both good resources and geographic advantages, it is also endowed with new functions due to many national strategies, such as the Belt and Road Initiative and the construction of the Guangdong-Hong Kong-Macao Greater Bay Area, according to 32-year-old Zhang Chunzi, who is in charge of a fund company.

"The young people in Hong Kong should make full use of these advantages to build a more beautiful Hong Kong and create a brighter future for themselves," Zhang said.

Difficulties and pressures that one meets at a young age will not be a life-long challenge.

"Youths from all over the world, including the Chinese mainland and Hong Kong, experience obstacles and pressures. They should be the impetus for our growth and development," said Huang Yandao, a student from Shenzhen University.

Many netizens also expressed their expectations for Hong Kong. "Young people decide the future of Hong Kong, but only young people who are rational and willing to achieve self-development through hard work can bring hope for Hong Kong," read a comment.