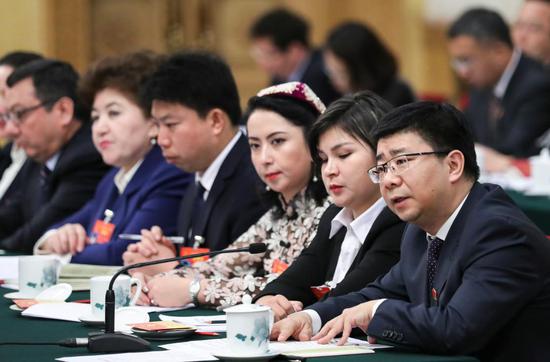 Vocational education centers in the Xinjiang Uygur autonomous region are not concentration or re-education camps as portrayed in some media reports, Shohrat Zakir, chairman of the regional government, said on Tuesday.

Instead, they have proved effective in eliminating religious extremism in the region, he said during a panel discussion of the annual session of the National People's Congress in Beijing.

Claims that the trainees are abused and their freedom is restricted in the centers are inaccurate, and there is no way there are more than 1 million people in them, Shohrat said.

He said the centers are actually boarding schools, and the trainees can ask for leave if they need to see their loved ones.

"We strictly prohibit anyone from treating trainees poorly, and their personal freedom is well protected. Also, their traditional customs are well respected," Shohrat said during the session, which was open to domestic and foreign media.

Xinjiang has launched a vocational education and training program according to laws and regulations. Its purpose is to get rid of the environment that breeds terrorism and religious extremism and prevent violent terrorist activities from happening, according to the regional government.

The trainees have been influenced by terrorism and extremism and are suspected of minor criminal offenses.

They can receive free classes to improve their skills in the country's common language and acquire knowledge of the law and vocational skills through vocational education centers set up around the region, the government has said.

"The centers have proved effective in eliminating religious extremism," Shohrat said on Tuesday. "Religious extremism is often disguised as a part of religion, which lures people to fall for it. After learning at the centers, graduates can better tell its true intentions."

The graduates of the centers can obtain a better command of the national common language. Before coming to the centers, many of them refused to learn the language, as it was prohibited by religious extremists, so it was difficult for them to communicate with others and find jobs.

After obtaining both language and skill certificates at the centers, they can find better jobs and increase their income, Shohrat said.

Xinjiang, which has been China's main battlefield in fighting terrorism, has not experienced any terrorist attack in 27 months, and the current social situation is under control, Shohrat added.

For a period of time, violent terrorist attacks frequently rocked the region. Since then the region has adopted a series of measures to maintain social stability.

"Those measures have never targeted a particular ethnic group or religion as some people in other countries have claimed," he said.

As the region becomes more stable, Shohrat said he believes there will be fewer trainees at the vocational centers.

"One day, the centers won't even be there, when there is no need for them anymore," he said.