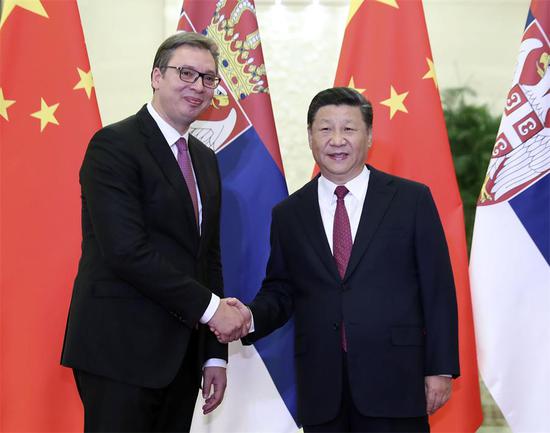 President Xi Jinping welcomed Serbian President Aleksandar Vucic who is in China to attend the Summer Davos Forum at the Great Hall of the People in Beijing, a day before the opening ceremony of the forum to be held in Tianjin. (Photo/Xinhua)

President Xi Jinping welcomed foreign leaders on Tuesday who are in China to attend the Summer Davos Forum, and he called for greater joint efforts in constructing the Belt and Road to better benefit their people.

Xi met separately with the presidents of Serbia, Estonia and Latvia as well as Samoa's prime minister at the Great Hall of the People in Beijing, a day before the opening ceremony of the forum to be held in Tianjin.

When meeting with Serbian President Aleksandar Vucic, Xi said China and Serbia should jointly build the Belt and Road, strengthen synergy of their development strategies and deepen bilateral cooperation.

The traditional friendship between China and Serbia is well-grounded, he said, and both sides share a high level of political mutual trust and enjoy fruitful results in pragmatic cooperation.

Xi said he is pleased to know that China's Hebei Iron and Steel Group and the Smederevo steel mill in Serbia are maintaining good cooperation. The Smederevo mill is the second-largest exporting enterprise in the Balkan country.

Vucic, for his part, said the revival of the Smederevo steel mill strongly demonstrates that the Belt and Road Initiative means more jobs and economic growth for Serbia.

His country will actively participate in the joint construction of the Belt and Road and explore new cooperation with China under the framework of China-Central and Eastern Europe cooperation, he said.