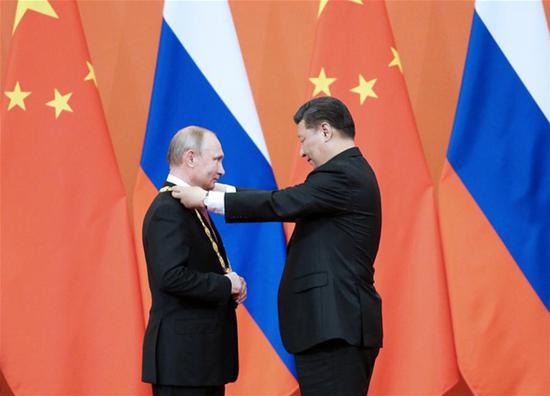 President Xi Jinping awards his Russian counterpart Vladimir Putin the first-ever Friendship Medal of the People's Republic of China at the Great Hall of the People in Beijing, June 8, 2018. (Photo/Xinhua)

Xi will attend the fourth Eastern Economic Forum from Tuesday to Wednesday in Vladivostok, Russia, at the invitation of Russian President Vladimir Putin.

It will be the first time for Xi to attend the forum since the annual event was proposed by Putin in 2015.

Li Hui, China's ambassador to Russia, told Xinhua News Agency that Xi's attendance at the forum will be a milestone for the development of China-Russia relations in the new era, and will set a new course for regional peace and stability.

According to the diplomat, Xi's attendance at the forum shows that in order to promote regional economic development, it is the right choice to stick to a win-win principle, improve cooperation, push forward trade and investment facilitation, and jointly build a community with a shared future for mankind.

Jin Yong, deputy head of the School of International Studies at the Communication University of China, said that Xi's attendance at the forum will promote regional economic cooperation, which is of great significance at a time when trade protectionism is rising.

"It shows China's positive gesture toward promoting cooperation in the region," he said.

The Belt and Road Initiative, put forward by China, and the Eurasian Economic Union, proposed by Russia, are going to further connect and integrate with each other as the two countries move closer together, he added.

Albert Kumukov, a communications official from the Karachay-Cherkess Republic government in Russia, said the participation of Xi at the forum and his meeting with Putin will help boost communication and mutual trust between the two countries.

"Chinese language courses are popular in Russia, and the visit marks magnificent significance for the future of relations and our cooperation," he said.

Andrei Ostrovsky, deputy director of the Institute of the Far East at the Russian Academy of Sciences, said the visit means a lot, not only for Russia and China, but also to the region as well.

As the second-largest economy in the world, China has a great influence on global economic development and the movement of commodities, Ostrovsky said.

Deeper Russia-China cooperation will make a positive impact on the economic development of Northeast Asia, he said.

Russian news website ekd.me said Xi's visit will widen the breadth of topics to be discussed between the two partners, and the two governments will mainly discuss development of cross-border electronic commerce.

Also during the visit, political and financial support for Chinese and Russian companies implementing projects in the Far East will be discussed, ekd.me said.

Russian newspaper Izvestia noted the visit of Xi to Russia will be the seventh since 2013, adding that the comprehensive strategic partnership of coordination serves as an effective model for the bilateral relationship.