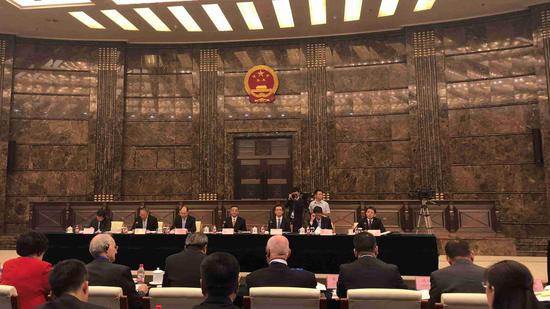 The committee was established in Beijing on August 26, 2018. /CGTN Photo

The first group of 32 Chinese and foreign experts were appointed as the members of the expert committee.

The first and second international commercial courts of the Supreme People's Court were recently inaugurated in Shenzhen in southern Guangdong Province and Xi'an in northern Shaanxi province.

A total of 32 members could be entrusted by the International Commercial Courts to mediate international commercial disputes and provide advisory opinions to People's Courts on specialized legal issues.

Meanwhile, they could also advise on the revision of the rules of International Commercial Courts, judicial interpretations and judicial policies of the Supreme People's Court.

"China has brought a really outstanding group of experts. It's brought together from inside China and around the world. This is important because it not only brings in international expertise, but it shows the confidence the international community has in this new court," Sir William Blair, a former justice in charge of the Commercial Court of England and Wales said at the meeting.

In order to promote the smooth facilitation of trade, especially along the Belt and Road trade route, an effective dispute resolution system is needed, according to Rimsky Yuen, former secretary for justice of Hong Kong.

The international commercial court is a milestone in the judicial history of China, he said.

"Our country is stressing the importance of governing the country in accordance with the rule of law, I think the setting up of CICC (China International Commercial Court), is going to achieve that objective," he said at the meeting.

Zhang Yuejiao, former chair of the WTO Appellate Body, said, "China's judicial reform is known to the world. I've brought experts from WTO to visit the Supreme People's Court. They are amazed to see what China's court has achieved."