Iran to stick to nuclear deal despite U.S. withdrawal: president 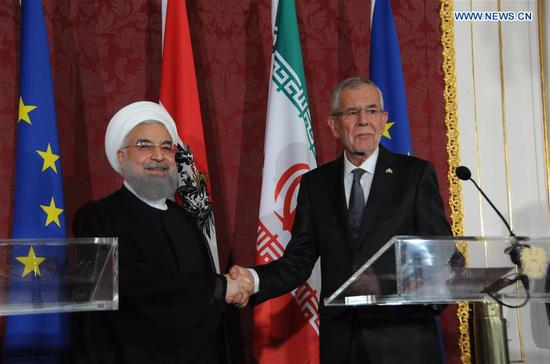 Iranian President Hassan Rouhani Wednesday reassured his country's intention on sticking to the Iranian nuclear deal despite a recent withdrawal by the United States.

Rouhani made the comments during a state visit to the Austrian capital Vienna, where he was welcomed with military honors and greeted by his Austrian counterpart Alexander Van der Bellen.

"What the Americans have done was against all agreements, against peace and against stability," he said.

The agreement is designed to oppose the proliferation of nuclear weapons, he said, and was unanimously backed by the United Nations Security Council, and has continued support from the European Union including Austria.

Van der Bellen said in Austria's view the agreement made in Vienna three years ago is a "key element" in the non-proliferation of nuclear weapons.

As host country to nuclear-related talks Austria is also "particularly obligated" to see the process through. Should Tehran hold its side of the agreement, Austria will support continuation of the deal.

Iran signed the landmark nuclear deal (Joint Comprehensive Plan of Action) with the United States, Britain, France, Russia and China plus Germany in 2015 to halt its nuclear weapons program in exchange for sanctions relief.

However, U.S. President Donald Trump decided on May 8 to quit the Iranian nuclear deal and vowed to re-impose sanctions, including oil embargo, on Tehran, on grounds that the deal had failed to prevent Iran from developing nuclear weapons or supporting terrorism in the region.

Immediately after Trump's announcement, many countries condemned the move as they said the U.S. move threatens regional peace and pushes the region to the edge of war.

Last week, the U.S. State Department announced that the U.S. has been pushing its allies to stop oil imports from Iran by Nov. 4.

President Trump has asked Saudi Arabia to increase its oil exports to compensate the shortage in the market demands in case Iran's crude exports drop.

Iran's Petroleum Ministry has said it has been prepared for the worst-case scenarios in case the U.S. pressures take effect.