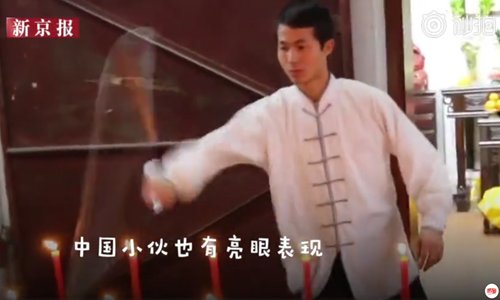 A Chinese martial arts master sets a world record for extinguishing most lit candles in one minute using a two section nunchaku. (Photo/Screenshot from the Beijing News)

A Chinese martial arts master has set a world record by blowing 52 candles with a traditional Chinese weapon within one minute, the Beijing News reported on Tuesday saying the feat has been published in the 2020 edition of the Guinness World Records.

The man furiously swung the weapon known as a nunchaku, hitting only the flames of the candles, putting them out without making contact with the candles themselves, as seen in a video the Beijing News posted on Sina Weibo.

The report also mentioned some other odd records, such as the longest distance an arrow shot using feet has traveled, the person who has most tattoos, and the world's longest handmade egg noodles.