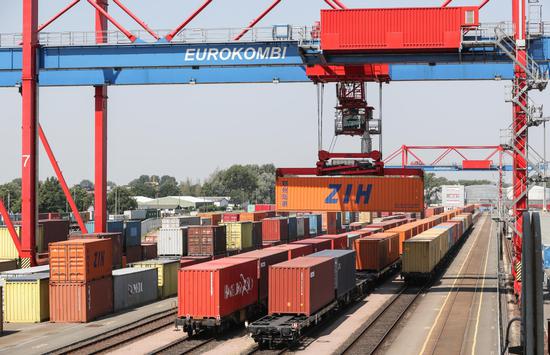 A tower crane unloads containers from a China-Europe rail freight train at the Port of Hamburg, Germany, in 2018. (Photo/Xinhua)

China-Europe rail freight service is expected to continue to grow at a rapid pace in the foreseeable future, and the Port of Hamburg foresees great prospects for cooperation with China, said an executive from Port of Hamburg Marketing.

The Port of Hamburg is one of Europe's biggest hubs for trade with China. In 2020, more than 2.4 million standard containers were handled in Germany's largest seaport, to and from China. Nearly one-third of all containers passing through the Port of Hamburg have China as their destination or origin, and a total of 15 liner services connect Hamburg with all major Chinese ports, Mattern said.

"One of the main strengths is the port's connection to the European railway network as no other port in Europe offers a similar, extensive coverage. The Port of Hamburg is the central hub for China traffic not only for Germany, but also for Austria, Poland, the Czech Republic, Russia, Hungary, Slovakia and Switzerland," he said.

In 2020 Hamburg's seaport-hinterland transport by rail accounted for a volume of 46.6 million metric tons and 2.6 million twenty-foot equivalent units (TEU). In terms of volume, 2020 was the third-best year, and in terms of the number of containers carried it was the second-best year in the history of Hamburg Port Railway. The railway was even able to increase its share of the modal split in seaport-hinterland traffic by 1.3 percentage points to 50.7 percent, Mattern said.

He said approximately 200 freight trains and 5,500 wagons are handled every day in Hamburg. There are now more than 160 rail operators using these tracks, with a dense network of wagon load traffic as well as shuttle and block train connections throughout Europe.

Every week, there are nearly 2,000 connections to and from Hamburg－just over 230 of them per week with China. Cities including Changchun in Jilin province, Changsha in Hunan province, Chengdu in Sichuan province, Chongqing, and Dalian in Liaoning province are linked to Hamburg by regular train services via the New Silk Road.

In November 2020 and April this year, two more connections between Hamburg and Xuzhou, Jiangsu province, and Shijiazhuang, Hebei province, respectively, were added.

"Although rail freight transport still lags behind its maritime counterpart in terms of the volume of goods transported, it definitely plays an important role in boosting economic relations and trade between China, Germany and other countries," Mattern said. "The signs are good. More trains and ships have the Port of Hamburg as their destination or starting point. The economic forecast, especially for German-Chinese business relations, is very good."

For instance, many large logistics companies based in Hamburg, such as Dachser and Hellmann, were already making intensive use of the transport routes of the New Silk Road before the COVID-19 pandemic. The first test train from Xiangtang town in Nanchang, Jiangxi province, reached Hamburg in 2008.

According to Mattern, due to suspended scheduled connections and limited capacities of air freight during the pandemic, demand for train connections also increased in the Port of Hamburg. The first train from Jinan, Shandong province, for example, arrived at Hamburg's rail terminal in April 2020 in the midst of the pandemic.

"We were able to get medical supplies to Hamburg very quickly during the crisis via the train connections," he said. "Thanks to the excellent connections to the European hinterland, Hamburg can play a valuable part in supplying the population with relief goods and keeping the shelves in the supermarkets full, both by waterways and by rail."

Throughput on intercontinental rail traffic between Hamburg and China alone increased by at least 7 percent in 2020, bringing the total volume to 107,000 TEU. Up to 40 trains per week are meanwhile running between various provinces in China and Europe's largest rail port, he added.

"The Port of Hamburg leads all ports in rail transport. Naturally, its excellent position as a transport hub also contributes to all rail connections with China," he said. "We see that there is further potential for growth. Hamburg and its logistics firms are in any case prepared to further intensify cooperation with partners and friends from China."