Clean energy to pivot on new green plans of distributors 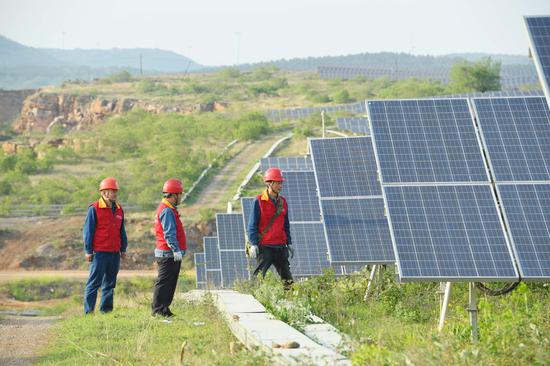 The focus will be on new energy, which will further step up the cross-regional transmission of clean energy in the country, they said.

In their plans, the two energy behemoths pledged to focus on the promotion of clean-green energy to replace coal-and fossil fuel-powered electricity in industrial manufacturing, construction and transport. Such a clean energy supply system will have diverse sources of power.

Their plans are in line with the country's resolve to prioritize the reduction of carbon dioxide emissions in future development.

China announced earlier that it would peak its carbon dioxide emissions by 2030 and achieve carbon neutrality by 2060.

State Grid Corp of China, the world's largest utility operator, plans to increase its proportion of non-fossil fuels in primary energy consumption to 20 percent by 2025 and 25 percent by 2030, ramping up clean energy infrastructure, including those of wind, solar and hydro-power.

The proportion of electricity in final energy consumption will also reach 30 percent by 2025 and 35 percent by 2030, it said.

It will also build seven ultrahigh voltage lines with a total power transmission capacity of 56 gigawatts by the end of 2025, and most of the newly added cross-region transmission lines will be transmitting the clean energy, it said.

The five regions currently have a new energy installed capacity of 50 million kilowatts, which will be improved by 2030. The proportion of non-fossil energy production in the five regions will also be increased to 61 percent by 2030, said Liu Wei, spokesman of China Southern Power Grid.

Digital power grid transformation will also be a highlight of the company's future work to ensure safe and stable operation of the power grid and to improve quality and efficiency of the new clean system's connection to the grid, he said.

Analysts said the two companies' vision of a diversified clean energy supply system will help increase the wind and solar energy infrastructure construction across the country, which will in turn further accelerate China's clean energy efforts.

"With an ambition for building more pumped hydro, wind and solar, State Grid is thinking of providing more flexibility and dispatch capacity to the power system, which are definitely the trends of grid-network upgrades even in a global sense," said Wei Hanyang, a power market analyst at Bloomberg New Energy.

"China Southern Power Grid, on the other hand, has long had the advantage of hydro-power dominance, but now it wants to develop not just hydro but also renewable energy, including wind and solar power," he said.

The Global Energy Interconnection Development and Cooperation Organization forecasts that solar and wind power capacity in China will reach 1,107 GW and 1,270 GW by 2035 and increase to 1,967 GW and 2,248 GW, respectively, by 2050.

Based on the forecast, Joseph Jacobelli, an energy analyst and senior adviser for Asia at Cenfura Ltd, a smart energy services company, believes the grids will also have to massively ramp up transmission investments.

He said the challenges for the whole electric power complex is how distributed generation and micro grids will be promoted on a large scale rather than in isolated areas with underprivileged population.

Wei also expressed concern that the implementation of carbon peak and carbon neutrality plans may lead to increase in costs of the overall power system. For, when energy is made greener, the intermittency factor may require technical equipment investment to ensure grid stability and avoid blackouts.