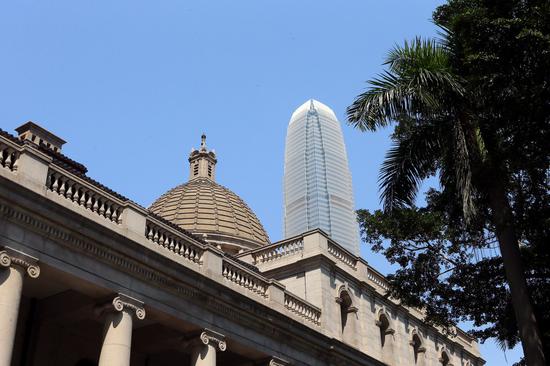 Chief Executive of the Hong Kong Monetary Authority (HKMA) Eddie Yue said on Monday that facts and figures show there is neither capital flight nor withdrawal of financial institutions in Hong Kong.

Yue made the comments in response to disinformation about the global financial hub, citing a series of positive financial figures, which were published in an online article.

Dismissing that capital is fleeing Hong Kong, Yue said "on the contrary, we have been recording net inflow."

Throughout 2020, the Hong Kong dollar remained strong as its exchange rate against the U.S. dollar has for 85 times hit the strong end of the trading band under the Linked Exchange Rate System since last April, taking in 50 billion U.S. dollars in aggregate, the largest amount in a year since 2010, he said, adding that total amount of banking deposits rose 2.9 percent in 2019 and 5.4 percent in 2020.

Free flow of capital is a defining feature of Hong Kong as a global financial center and is guaranteed under the Basic Law, Yue said.

There is also no private wealth or hedge funds and Exchange Traded Funds leaving Hong Kong in droves, Yue said.

There is also no private wealth or hedge funds and Exchange Traded Funds leaving Hong Kong in droves, Yue said.

Asset under management by Hong Kong's private banks went up by 19 percent in 2019 and Hong Kong remained the No. 1 private wealth management center in Asia and No. 2 globally only after Switzerland, he said.

"While we do not have 2020 figures yet, indicative numbers from major private banks suggest that the growth trend has continued on the back of strong 2019 performance, registering double-digit growth," Yue said.

Hong Kong has always been the largest private equity (PE) hub in the Asia-Pacific region after the Chinese mainland, Yue said.

At the end of 2019, total capital-under-management reached 160 billion U.S. dollars, and 15 out of the world's top 20 PE firms have established presence in Hong Kong. As to the more mobile hedge fund industry, as of June 2020, 445 hedge funds are based in Hong Kong, the largest number in the Asia-Pacific region.

Yue said Hong Kong's capital markets are also thriving as the Hong Kong exchange ranked the second in initial public offerings in 2020, only after Nasdaq by small margin, and was No. 1 in seven of the last 12 years.

Hong Kong also has an unshakable role in serving as the gateway between the mainland and the rest of the world, he said, citing the impressive growth of trading under the Stock and Bond Connect programs.

Average daily turnover of Stock Connect more than doubled in 2020 and around 70 percent of all A shares held by international investors are booked or traded through Hong Kong. Under Bond Connect, average daily turnover tripled in 2019 and then recorded an 82-percent increase in 2020.

Yue also denied there is any exodus of talents occurring in Hong Kong.

Last year, the number of jobs in Hong Kong's finance and insurance industry actually grew 0.7 percent and 1.4 percent, respectively, despite surging unemployment because of the pandemic.

Hong Kong's unique access to the mainland opportunities and its vibrant fintech and sustainable finance scene provide an excellent launching pad for talents of all sorts, Yue said.

"The HKMA team has the determination, capability, and commitment to do our part in safeguarding Hong Kong's financial stability and our international financial center status," Yue said. "We are confident because this would be in the best interest of not just Hong Kong but also the wider global financial community."