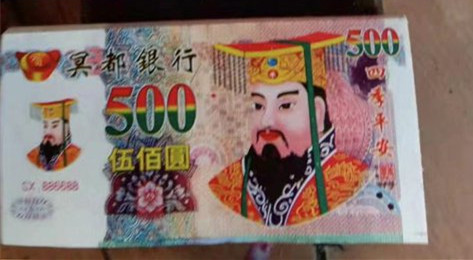 To safeguard the authority of the renminbi (RMB), the People's Bank of China published a regulation on using the currency's likeness, which bans it from appearing on any kind of sacrificial offering, including paper money.

The bank published an amended regulation on using the RMB's likeness on its website on Monday, pointing out that both intact and partial patterns of the RMB must not be used on products such as sacrificial offerings.

The bank explained that the ban is aimed at protecting the RMB's reputation and circulation order, as well as improving the management of the legal currency.

The bank said that disrespecting the RMB's likeness, such as distorting them, will damage the currency's image.

For example, it is a custom to burn paper money, with part of the RMB's likeness on them during the Qingming Festival, also known as the traditional Chinese Tomb-Sweeping Day when people visit their ancestors' graves and tombs of their deceased loved ones.

A 55-year-old man from North China's Shanxi Province showed several kinds of paper money to the Global Times on Monday, which are being sold. Most of them choose parts of the likeness of different denominations, such as flowers on the 50 yuan note.

The man, who honors his grandfather and other deceased relatives each Qingming Festival, told the Global Times that such ban will not influence him.

"Any kind of paper money that can be burned as an offering to my deceased relatives is acceptable to me," said him.