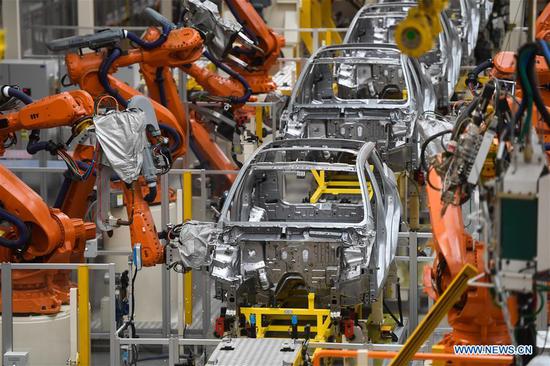 In the midst of a complex external environment, China's economy ended 2018 on firm footing, with better quality and improved structure.

The world's second-largest economy grew 6.6 percent year-on-year to reach 90.0309 trillion yuan (about 13.28 trillion U.S. dollars) in 2018, above the official target of around 6.5 percent, data from the National Bureau of Statistics (NBS) showed Monday.

China is still and will long remain in an important period of strategic opportunity for development, and its fundamentals of long-term sound development do not and will not change, Ning Jizhe, head of the NBS, said at a press conference.

While the 6.6-percent growth rate was lower than the 6.8-percent growth registered in 2017, it is still a relatively fast pace that pointed to resilience in the economy, analysts said.

The pace marked the fastest among the world's top five economies, noted Ning, adding that China contributed to nearly 30 percent of the world's economic growth and remained the largest contributor to global growth.

A closer look at the data showed some bright spots in the economy. Fixed-asset investment (FAI), for example, has seen a pick-up in recent months thanks partly to government measures to improve infrastructure.

FAI rose by 5.9 percent year-on-year in 2018, 0.5 percentage points faster than that recorded in the first three quarters, NBS data showed.

Ning noted that the demand for infrastructure investment is still high in areas including rural development and urban transport systems, as China still lags behind many developed countries in terms of infrastructure per capita.

"As we continue to implement policies this year, we can expect stronger investment data," Ning said.

Resilience was also seen in the growing spending power of Chinese consumers. Per-capita disposable income stood at 28,228 yuan in 2018, up 6.5 percent year-on-year in real terms.

Solid progress in economic upgrades and development in high-end manufacturing are reinforcing the country's economic foundation, Cheng Shi with ICBC International said in a research note.

Monday's data also showed consumption played an increasingly bigger role in the economy, contributing 76.2 percent of GDP growth, up significantly by 18.6 percentage points from a year ago.

Warning about a more complicated and tough external environment this year, Ning said China had the foundation, condition, confidence and capability to keep economic growth within a reasonable range.

Ning justified his judgment, citing favorable conditions for the country's development, including opportunities brought by changes in global and domestic situation, a massive consumer market, rich resources and talent, development dividends unleashed by reforms and ample room for policy maneuver.

With a population of nearly 1.4 billion and an expanding middle-income group that topped 400 million in 2017, consumption will remain a major driver of growth, while policies to increase resident income and improve quality of goods and services will further unleash its potential, Ning said.

By increasing imports, analysts said China would provide more benefits to the rest of the world. The country vowed to import 40 trillion dollars worth of products and services in the next 15 years.

Measures will be unveiled to stabilize employment, the financial market, foreign trade, foreign investment, domestic investment and expectations, and policy makers repeatedly stated that the country will not resort to massive economic stimulus.

This year's macro-regulation will focus on counter-cyclical adjustments, and the country will implement proactive fiscal policy and prudent monetary policy, Ning said.

Although downward pressure will weigh on growth, the country's GDP growth will stabilize this year, underpinned by the government's supportive policies, said Lian Ping, chief economist with the Bank of Communications.

With a long-term perspective to assess the country's economic performance, Liu Shijin, an economist with the China Development Research Foundation, expects the economy to enter a stage of stable medium-speed growth in 2020, saying it would last for at least 10 years.