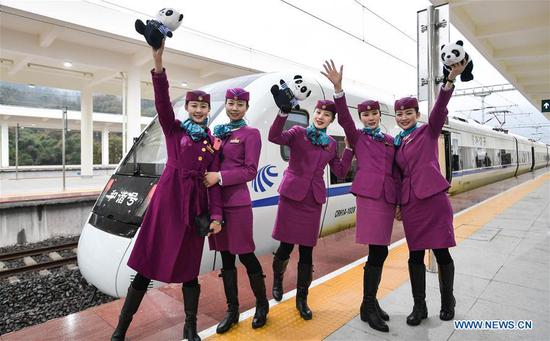 The train conductors pose for photos before the bullet train of Chengdu-Ya'an high-speed railway at Ya'an station in Ya'an, Southwest China's Sichuan province, on Dec 28, 2018. (Photo/Xinhua)

Country will hit its goal of 30,000 km of track one year ahead of schedule

Although China Railway Corp did not specify the amount of investment for this year, it planned to put a total of 6,800 kilometers of new tracks, including 3,200 high-speed lines, into operation－more rail than was introduced in 2018－the company said at its annual conference on Wednesday.

As of the end of last year, the total length of China's high-speed railways rose to 29,000 km, more than two-thirds of the world's total, it said.

With the new high-speed lines to be put in operation this year, China will reach its goal of building a 30,000-km high-speed rail network one year ahead of schedule.

"Double-digit growth of fixed-asset investment is already a thing of the past that we can't go back to," said Yu Yongding, director of the Institute of World Economics and Politics at the Chinese Academy of Social Sciences. "Spending on railway infrastructure will remain strong under the long-term construction plan and it will help sustain the level of national investment and boost the economy."

Lu Dongfu, general manager of CRC, said China has the world's most advanced railway network and also the most developed high-speed network, but there is still a major problem in that it's unevenly distributed.

It is necessary to bolster areas of weakness in railway construction in former revolutionary base areas, remote and border areas and poverty-stricken areas in the central and western regions, and speed up a number of major projects such as the Sichuan-Tibet railway to improve the current railway network, he said.

The 1,700-km Sichuan-Tibet railway is planned to run from Chengdu, Sichuan province, through Ya'an and Kangding, and then enter the Tibet autonomous region via Qamdo and Nyingchi before finally arriving in Lhasa.

While construction began in 2014 on two easier parts of the line－between Lhasa and Nyingchi, and between Chengdu and Ya'an－the Nyingchi-Ya'an section goes through a complicated area fraught with avalanches, landslides, earthquakes, heat, karst caves and underground streams. The Chengdu-Ya'an high-speed railway started operation last month.

CRC said it will complete the feasibility study of the section by June and make things ready for construction by the end of September.

Once the Sichuan-Tibet railway is completed, it will only take 13 hours to travel to Lhasa from Chengdu, Chongqing or Xi'an.