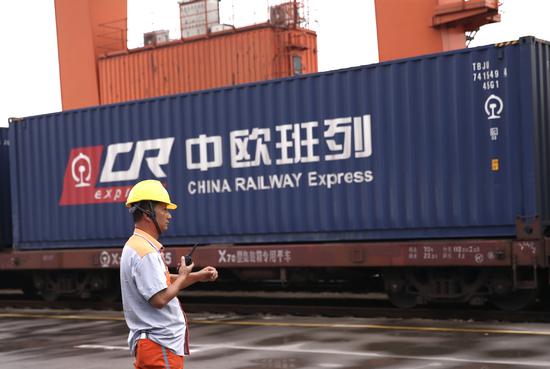 Goods from Urumqi in China's Xinjiang Uygur autonomous region will soon enjoy lower logistics costs and shorter travel time to Azerbaijan, Georgia, Iran and Turkey, as a result of new cargo routes due to open this year.

"The new routes will further boost trade between China and economies involved in the Belt and Road Initiative," said He.

He added that the company is seeking clients willing to join the test running of the routes. "Most of the clients we are currently looking for are in the home accessory sector, which we found is of great need in countries in the Caucasus and Middle East areas," said He.

He added that the new routes were proposed at a time when logistics networks no longer met the growing demand of China's cross-border trade with these areas.

In 2017, total shipments rose 261 percent year-on-year. According to Liu Qi, a government official at the Economic and Information Commission of Xinjiang that regulates the trains' daily operations, this year 1,400 trips are expected to be made from Xinjiang.

"The Sino Euro Cargo Railway is growing to be a vital artery to strengthen trade ties between China and economies involved in the Belt and Road Initiative, and beyond," He said.

He explained that as the Sino Euro Cargo Railway trains use standard shipping containers, it can cut the shipping time by about 20 percent, compared with the past when they used regular freight trains and had to wait for the train to be fully loaded with goods from other clients before departure.

Xiao said it takes about 30 days for their steel to be shipped to Moscow, but now the shipping time is 10 days and costs have been cut by 5 percent due to a shortened shipping period.

Xiao also noted that the company is eyeing more potential markets, especially those involved in the Belt and Road Initiative, as those countries have preferential policies to encourage mutual trade, and the increasing routes linking China with those countries guarantee less costly logistics.