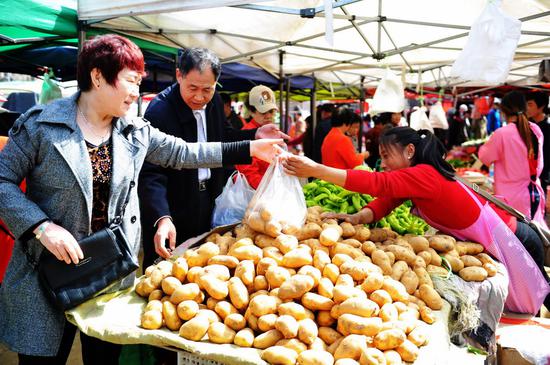 China's Consumer Confidence Index, dropped two points in the second quarter but remained at a high level of 113 points, Nielsen revealed on Monday.

Nielsen's CCI index measures perceptions of local job prospects, personal finance and the willingness to purchase. Consumer confidence levels above and below a baseline of 100 indicate degrees of optimism and pessimism, respectively.

"As the global economic situation becomes more complex, China's economy remained resilient. The structure and production efficiency of the economy are steadily optimized, and the transformation and upgrading of the economy continues to open new drivers for growth. That laid a solid foundation for high-quality economic development," said Andy Zhao, president of Nielsen China.

Data from the National Bureau of Statistics showed China's gross domestic product expanded 6.7 percent year-on-year, slightly lower than the 6.8 percent from the first three months. But in the first half of 2018, GDP rose by 6.8 percent year-on-year. It indicated the advance of supply-side structural reform continued to provide motivation to China's economy, laying a foundation for steady economic growth and high-level CCI.

"While the economy is growing steadily, the Chinese government is ramping up efforts on the weak aspects of consumer industries. It is promoting the ‘quality' and ‘quantity' supplies of the sector, aiming to boost consumption upgrades and willingness to purchase through stimulation of the environment," Zhao said.