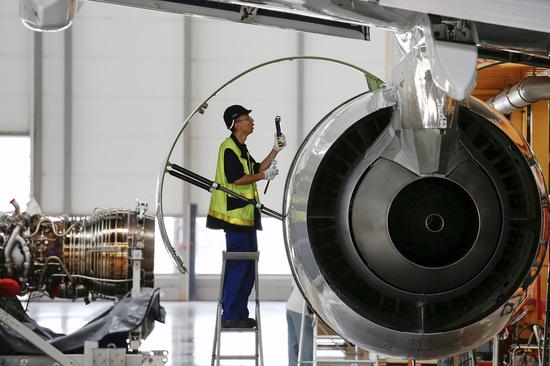 An employee checks an engine at the A320 family final assembly line of the Airbus factory in Tianjin. (Photo provided to China Daily)

China keeps its attractiveness to investors despite U.S. trade dispute

China's foreign direct investment remained stable and dynamic in the first seven months of 2018, as the total volume grew by 5.5 percent year-on-year to $76.07 billion, the Ministry of Commerce announced on Thursday.

From January to July, a total of 35,239 foreign-invested companies were set up in the Chinese mainland, up 99.1 percent year-on-year.

FDI from Singapore, the United States, United Kingdom, South Korea and Japan grew by 23.5 percent, 12 percent, 86.1 percent, 36.5 percent and 30.6 percent year-on-year respectively, according to the ministry.

Despite the escalation of the China-U.S. trade dispute, a senior expert said there was no reason to doubt China's attraction to foreign investment as long as its domestic economy remains stable, therefore the country's ongoing consumption upgrading boom and service infrastructure will remain promising to global investors.

Cheng Dawei, a professor at the School of Economics of Renmin University of China, said although the ongoing trade friction between the U.S. and China has not had any negative impact so far, foreign capital still has confidence in China as the FDI flow remained stable.

"Both China's productivity and consumption power will grow in the long run. Chinese consumers, led by middle-income earners, are more open to new products, especially digital ones," she said.

According to Cheng, China's completed infrastructure for the entire industrial chain is another competitive advantage the nation possesses that is not easy to be replaced.

"China has a well-developed supporting infrastructure for a wide range of industries with large production capacity, providing solid support for foreign investors intending to manufacture here," she said.

"China's manufacturing capability and huge market potential will continue to attract innovation-driven companies to move to the market to commercialize their latest technologies quickly at a lower cost," she said.