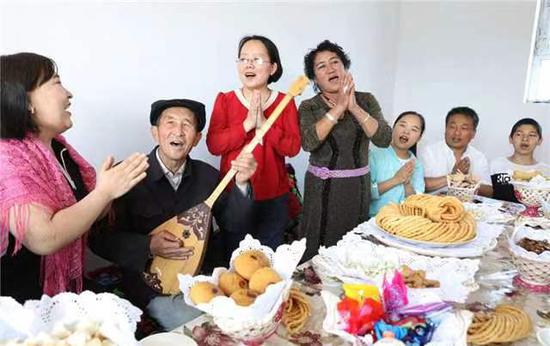 Otgur Amut, a resident of Urumqi's Tianshan district, got up early to prepare a variety of delicacies with his wife, including meat soup, zhuafan (fried rice with mutton and carrots) and deep-fried dough for the couple's siblings, who would be coming to celebrate the festival. People from all ethnic groups get a one-day holiday for the festival.

"The festival offers me a chance to strengthen the emotional bonds with my family and friends, given that I've been busy at work recently," he said.

The family really cherishes this year's family reunion since they had to stay at home to comply with social distancing rules during last year's Roza Festival, he added.

The festival also marks the end of Ramadan, a holy month in which many Muslims fast from dawn to dusk.

Last year, Muslims had to pray at home during the Roza Festival to curb the spread of the virus.

This year, with strict epidemic prevention measures in place, they can worship at mosques to celebrate the festival.

More than 1,000 Muslims went to pray at the Yanghang Mosque in Urumqi at 7:10 am on Thursday.

Molla Mamat, 97, was helped by his son Sawur Molla to attend the celebration. He said he had been going to pray at the mosque over the past 30 years.

Hasan Musa, imam of a mosque in the Erdaoqiao area of Urumqi, said that people entering the mosque must wear masks, disinfect their hands and have their temperature taken. Recently, residents have undergone nucleic acid tests every two months, he said. Last year, an outbreak of COVID-19 in Urumqi led to a lockdown.

"They used to hug each other, dance and sing during the celebration. This year, they just go back home after the completion of the worship activities," he added.