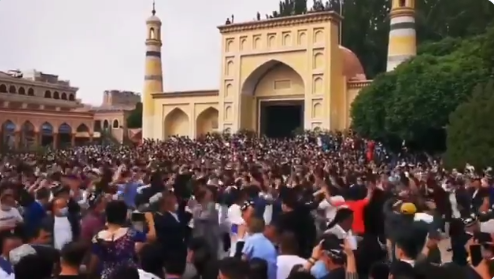 After visiting mosques in the early morning, Muslims of various ethnic minorities danced in places such as the square in front of Id Kah Mosque in Kashgar and the International Grand Bazaar in Urumqi to celebrate.

The cheerful music and dancing attracted many tourists to join in the celebration.

Many local residents went to stalls and supermarkets to purchase festival foods.

"We are taking a day off on Eid al-Fitr. We can fully enjoy the holiday and visit our relatives and friends thanks to effective epidemic prevention and control measures," said Nurbiya, a resident in Turpan.

With about 20 million Muslims in China, the event was also celebrated in other regions such as Qinghai, Gansu and Ningxia.

During Ramadan, the ninth month of the year in the Islamic calendar, Muslims fast from sunrise to sunset. Children, elderly people and the weak do not have to observe the fast.