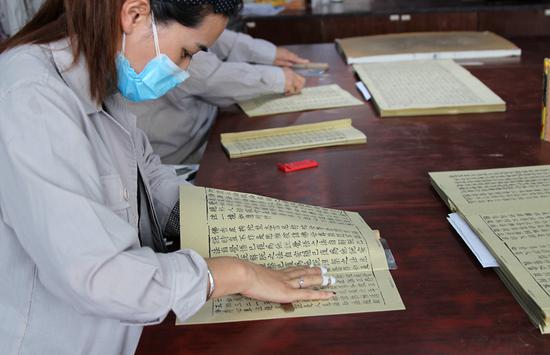 A Song Dynasty (960-1279) Tripitaka, a precious collection of ancient Buddhist classics, has been reprinted through the joint efforts of Chinese and Japanese scholars.

First compiled at the Sixi Yuanjue Monastery in Huzhou during the Northern Song Dynasty (960-1127), the collection, titled Sixizang, was completed in the year 1132 but was later ruined during war.

However, a full set of the classics was kept at a monastery in Japan. Part of the collection was bought back by Chinese historian Yang Shoujing from 1880 to 1884.

In 2012, Chinese and Japanese scholars joined in research for the publication of the Buddhist classics.

A ceremony was held on Saturday in Huzhou, Zhejiang Province, to mark the publication of the ancient classics after more than 1,000 years.

"Japanese scholars made arduous efforts to make the project possible. It will not only produce a complete collection of Buddhist classics, but serve as a landmark in the history of Sino-Japanese cultural exchange," said Li Jining, a scholar from National Library of China.

Recalling the hard work of research and printing in the past seven years, Xu Liling, the project manager, could not hold back her tears.

"When the flash drive containing the missing classics was handed over to me from Japan, I held it tight in my arms. I was just trembling, too excited to say a word."

The National Library of China and Iwaya-ji Temple in Japan, which had been preserving the classics since the Song Dynasty, were the first Chinese and Japanese institutions to receive the new edition of Sixizang.