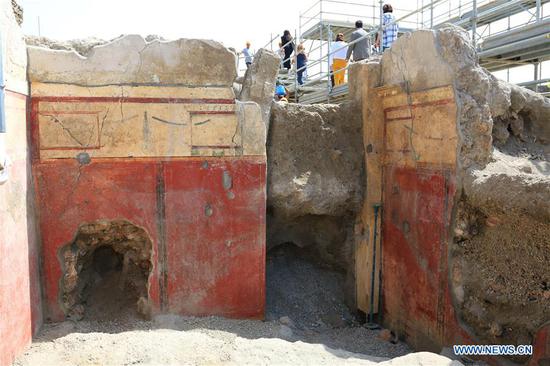 Onto one wall recently unearthed along the alleys of the ancient Roman city of Pompeii, an electoral slogan promoted a local notable at the time.

"Please elect Elvio Sabino, worthy of the state, a good man," the writing said in Latin.

Few meters away, an archaeologist delicately brushed volcanic ash layers from another wall to bring frescoes in the "House of Dolphins" (so dubbed from the figures depicted) back to their original colors.

Other excavators digging at the Regio V -- an area of Pompeii still largely unexplored to date -- showed some coins, a hook, and other small relics just retrieved during their morning work.

In a corner of the "Jupiter House", a bronze candelabrum was found standing on the floor, perfectly preserved.

These and other clues of ancient Roman life have emerged from Pompeii's urban settlement -- buried by an eruption in 79 AD -- since a new excavation site was open in July 2017.

Fresh diggings started in October, and the discoveries made so far were worth the attention of the global community, according to cultural authorities. As such, on June 8, the site was opened to domestic and international press for the first time.

Three ancient houses were uncovered so far, as well as a short hallway with four balconies almost intact. In a garden, archaeologists were even able to identify the roots of the trees composing it.

The skeleton of a man killed by a huge stone while trying to flee the volcano eruption was also found, with a small bag of bronze and silver coins still in his hands.

He mentioned three human skulls firstly discovered in the 1800s, and recently unearthed again. "Archaeologists at that time were not interested, but today we are able to obtain a world of information from them," Osanna explained.

"We can understand their daily diet, their age and gender, and their eventual diseases, for example: for us, they represent an extraordinary documentation," he said.

Indeed, the archaeological team took visible pride in their ongoing work at this ancient city destroyed by a catastrophic eruption of Mount Vesuvius (near modern Naples), one year after becoming a Roman colony (80 AD).

Pompeii, a well-off commercial center and port, was buried under 4-6 meters of ash and volcanic material, as well as most of its estimated 11,000 inhabitants.

The same happened to the nearby city of Herculaneum, and there they remained -- preserved under volcanic debris -- until they were re-discovered in the first half of 1700s.

Nowadays, some 3.5 million people visit Pompeii each year, and authorities said they would like to further boost their number, if the state of conservation of the site would allow it.

The ongoing excavation involved some 1,000 square metres within Regio V area, and it was part of a larger restoration plan -- the Great Pompeii Project -- stretching over 22 hectares, and co-funded by the European Union.

Overall, it would cost 8.5 million euros (10 million U.S. dollars) and last for at least two more years, according to the management.

Although Pompeii was subjected to several archaeological diggings, modern technologies would help experts in a way that was simply impossible only few decades ago.

For example, archaeologist Laura D'Esposito explained a preliminary investigation with ground-penetrating radar was carried out to locate solid structures at different depths under the soil. This helped the team direct the new excavations.

"Our tools are very different from those available when the last major excavation was made in the 1950s," director Osanna confirmed to Xinhua.

For instance, they could now use instruments such as drones and laser scanning, and count on a systematic video and photo documentation.

"Thanks to that, and to our better archaeological experience, we will be able to provide much more refined historical records to the next generations," Osanna said.

The new diggings were providing an unexpected number of objects -- such as fragments of clay decorations, frescoes, stucco, amphorae and stamped bricks -- that archaeologists in the nineteenth and twentieth centuries had already uncovered, and most likely discarded as of little interest.

Such relics would acquire a crucial value today, also thanks to a different scientific approach, according to the experts.

In fact, the Great Pompeii Project taught them "not to compartmentalize" their work, as it had often been done in the past instead.

"Architects focusing on restoration only, archaeologists on excavation and research, and so on... This method simply does not work anymore," the director general told Xinhua.

Now, each conservation and excavation work engaged a multi-disciplinary team comprised of architects, archaeologists, art conservators, and engineers, according to the manager.

Furthermore, specialised professionals within archaeology were hired for the project, such as botanic palaeontologists, zoo-archaeologists, and physical anthropologists.

This would make the new research efforts on Pompeii truly comprehensive.

"Our aim is to have a global archaeological site: it means taking a systematic approach in our work that might also serve as a model for other sites across the country," Osanna stressed.