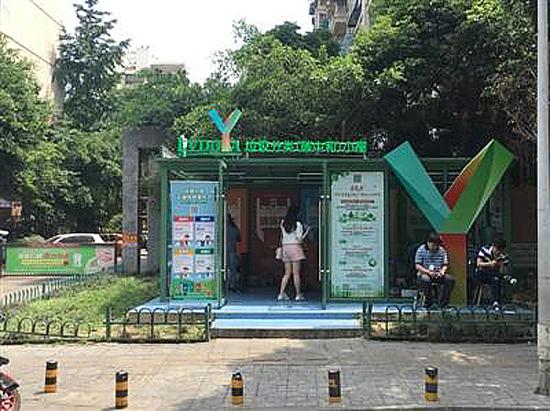 (ECNS) -- China's first carbon-neutral waste sorting station has reduced more than 15 tons of carbon dioxide emissions since it was put into use on January 14 in Wuhou District of Chengdu City, Sichuan Province, local media cited the Chengdu Urban Management Committee as saying.

Carbon neutrality refers to achieving zero carbon dioxide emissions by offsetting part of carbon emissions produced by individuals through waste sorting and recycling, a staff member of the station said.

A scale weighs and calculates the corresponding carbon neutral data of recyclable waste based on value and weight.

The daily recyclable waste has reached 200 to 300 kilograms.

Residents can receive reward for recycling their waste and save the money in their WeChat Wallet. The company will subsidize 100 yuan ($15.5) to those who have reduced their emissions to one ton.

In addition to waste sorting, people can also participate in question and answer games about carbon neutral knowledge in an App to get credits which can be converted to carbon neutral data.

It can help citizens better understand the concept of carbon neutrality and ditch bad habits, the staff member said.

The city plans to build more carbon-neutral waste sorting stations in the local subdistrict in the second half of 2021, according to the company managing the business of the station.