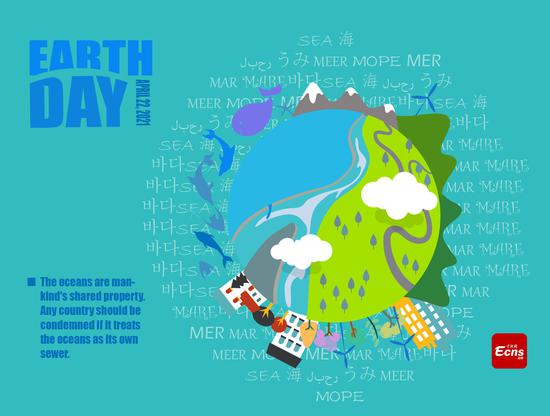 (ECNS)--The 52nd Earth Day on April 22 will seek to raise awareness of protecting and cherishing the planet, our only home, amid the Japanese government's plans to release more than one million tons of Fukushima nuclear wastewater into the ocean.

The oceans are mankind’s shared property. Any country should be condemned if it treats the oceans as its own sewer. Given the large amount of nuclear wastewater and the plant's location, any reckless action will pose an unpredictable risk to the interests of Japan's public. The effects could also extend beyond Japan’s borders, harming the well-being of people in other countries and regions.

Japan's choice, which involves the lowest economic cost to itself but poses a threat to all humankind, was made before seeking consensus from the international community. Large countries should behave in a manner befitting their status, with a greater sense of responsibility. Japan should refrain from its plan before the contamination is actually made, leaving our children clean water and a secure planet.