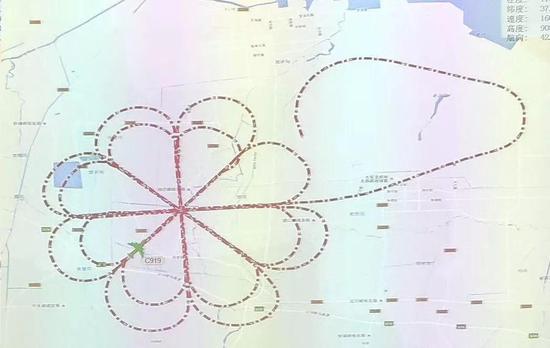 (ECNS) -- The fourth prototype of the C919 passenger jet made a mooncake-shaped pattern in the sky during a test flight from Dongying City in East China's Shandong Province on Saturday, days ahead of the Mid-Autumn Festival.

The C919, China's first homegrown trunk jetliner, conducted a successful maiden flight on May 5, 2017. In the second half of the year it has entered a new phase of intensive test flights, according to the Commercial Aircraft Corp. of China (COMAC).

COMAC said the special flight path, which depicted an eight-petalled flower, was its way of sending best wishes to everyone ahead of the festival, which falls on the 15th day of the eighth lunar month, or September 13 this year.

Watching the full moon, eating mooncakes, and solving riddles are some of the traditional ways the Mid-Autumn Festival is commemorated.

The current tests on the fourth prototype are mainly focused on the avionics system, take-off and landing performance, the automatic flight system, and capabilities in icy conditions. Test flights on two more C919 passenger jets will also begin this year.