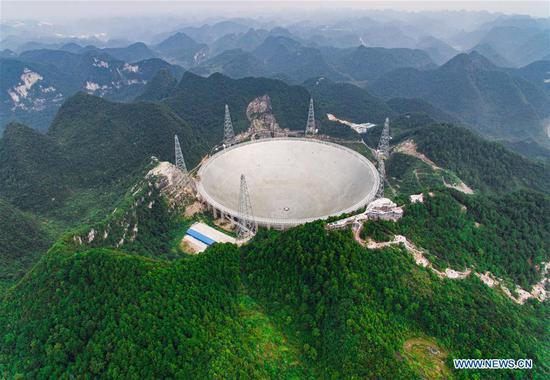 (ECNS) - Booming tourism will not impact the world's largest radio telescope in mountainous Guizhou Province, thanks to a slew of rigorous requirements, Science and Technology Daily reported on Wednesday.

Earlier in 2013, authorities had declared a quiet area within a 30-kilometer radius of the Five-hundred-meter Aperture Spherical Radio Telescope (FAST) site, with a five-kilometer core area, to reduce interference with the electromagnetic environment.

For a cost of 50 yuan ($7.3), visitors can travel 10 km by shuttle bus to the scenic area in the Dawodang depression, a natural karst basin in Pingtang County.

Authorities have minimized the impact of tourists on science researchers at FAST. Security checks are far stricter than those at an average airport.

Zhang Shuxin, an office director for the FAST project, said measures including a ban on radio stations, permanently shutting down a mobile communication base station, and the closure of a mine have contributed to controlling the electromagnetic wave environment in the quiet area of FAST.

Digital gadgets, including cellphones, smart wristbands and tablet computers, and items like car keys, lighters, fruit knives and scissors, are not allowed on the shuttle buses, which transport visitors to the FAST hot-spots.

Visitors can view the impressive project from a designated platform. If they want to take photos they can rent a manual film camera on the spot. There are no cell phone signals but a fixed-line telephone service is available.

According to local media, in the first half of 2018, Pingtang earned 5.518 billion yuan from tourism, a year-on-year increase of 38.74 percent, and received 5.363 million tourists, an increase of 40.58 percent. The number of tourists outside the province was about 2.98 million, a year-on-year growth of 42.05 percent.

The scenic area has a daily cap of 2,000 visitors within its core area, and since Sept. 20, all tourists need to make an online reservation prior to arrival.

Jiang Peng, chief engineer for the FAST project, said the overall quality of the FAST electromagnetic environment had been relatively good so far and the increase in tourists, as long as it is properly managed, is not an issue.