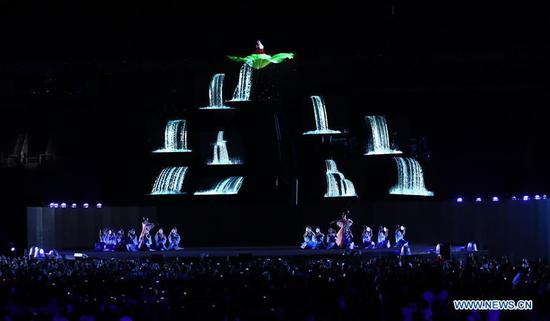 (ECNS) - Alibaba co-founder and executive chairman Jack Ma and famous swimmer Sun Yang have extended a welcome to Asia on behalf of Hangzhou, the host city of the next Asian Games in 2022.

The Asian Games torch, the first Asian Games flag and the Olympic Council of Asia flag were handed over to Gou Zhongwen, director of the Chinese General Administration of Sports, during the closing ceremony of the 2018 Asian Games in Jakarta. Gou then passed them to Hangzhou mayor Xu Liyi, officially kicking off the city’s hosting of the Asian Games.

A video showcased the beautiful landscape of Hangzhou, a top tourist destination in China, as well as its rich cultural and historical heritage. Chinese performers danced and played traditional Chinese musical instruments, in addition to a spectacular robot show.

Jack Ma, born in Hangzhou, finished his bachelor’s degree and worked as an English teacher there. E-commerce giant Alibaba is headquartered in the city. Sun Yang, a Chinese Olympic and world-record-holding competitive swimmer, was also born in Hangzhou.