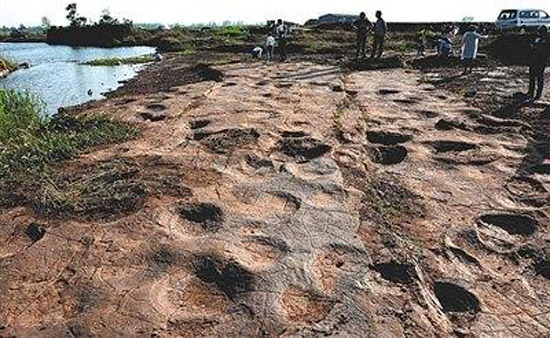 (ECNS) -- Paleontologists have discovered evidence suggesting that dromaeosaurids lived together in groups, a conclusion that might put an end to a long-running dispute about the accuracy of the raptors depicted in the blockbuster film Jurassic Park, Beijing Youth Daily reported.

Xing Lida, an associate professor at China University of Geosciences (Beijing), along with other experts, began researching rare trackways in Tancheng County, East China's Shandong Province, in April 2017, after they were first discovered by fossil enthusiasts in 2015.

The site on the county’s Maling Mountain was once home to dinosaurs of different varieties and in great numbers. Among the most striking of finds at the site are parallel footprints of dromaeosaurids, a two-legged feathered dinosaur.

Each footprint measures seven to eight centimeters in length, forming four traces that are in parallel—typical evidence of dinosaurs traveling together and living in a group, Xing said.

There have been disputes over the accuracy of the dinosaurs depicted in Jurassic Park, with some arguing it was rare for dromaeosaurus, a genus of theropod dinosaur that lived during the Late Cretaceous period, to live in a group, but the new finding puts an end to any controversy, according to Xing.