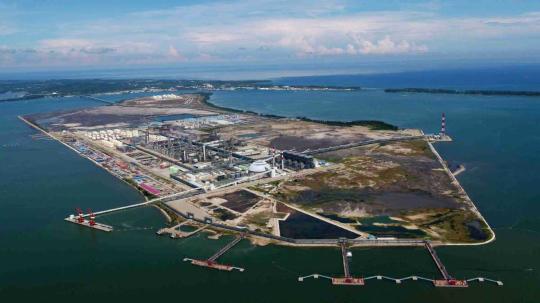 An aerial view of the construction site of the petrochemical project run by Zhejiang Hengyi Group Co Ltd in Brunei in November 2019. China Development Bank Securities underwrites the bonds issued by Hengyi to back the project. (Photo/Xinhua)

"We remain committed to boosting the real economy and will actively advance business lines that are associated with the country's bond market opening-up," said Sun Xiaokun, chairman of China Development Bank Securities.

Set up in 2010 with 80 percent of its stake held by China Development Bank－a State-funded and State-owned development bank－CDB Securities is known as one of the major corporate bond underwriters in the country's securities industry while providing other financial services such as equity underwriting and asset management.

Leveraging its competitive edge in the bond market, CDB Securities has actively provided services for financing projects that contribute to the country's opening-up agenda in recent years, whose total proceeds have reached 43 billion yuan ($6.18 billion), Sun said in an exclusive interview with China Daily recently.

For instance, CDB Securities underwrote the bonds issued by Zhejiang Hengyi Group Co Ltd, with proceeds used for the construction of a petrochemical project in Brunei, he said.

The company also participated in the CDB's issuance of green bonds that were sold to both domestic and international investors via the Bond Connect mechanism, Sun added.

A key report delivered at the opening session of the 20th National Congress of the Communist Party of China called for more efforts to promote high-standard opening-up and steadily expand institutional opening-up with regard to rules, regulations, management and standards.

Sun said securities firms have a positive role to play in the country's high-standard opening-up. Efforts should be made to help more quality companies access financing in China's capital market, which could sharpen the market's appeal to international investors.

Securities firms should also provide customized services to meet the rising demand of corporate clients for cross-border finance as the domestic capital market further integrates with international peers, he said.

Sun said that a key to achieving high-quality development of securities firms is to ensure industry players have differentiated strategic positioning and specialized professional capacity, so as to cater to the diverse financing needs in the real economy.

CDB Securities has built itself a distinctive edge in the bond market by virtue of its parent company's advantages in the field, Sun said, adding that the company has underwritten more than 1.4 trillion yuan in bonds since its establishment, a number that ranks among the biggest in the country's securities industry.

Meanwhile, CDB Securities places the development of corporate culture high on its agenda, Sun said, stressing that compliance, integrity, professionalism and prudence are important values to aspire to.

These values are vital not only for the capital market on the whole, but also for individual companies like CDB Securities, Sun said, adding that the company must also draw inspiration from the time-honored Chinese culture.

The China Securities Regulatory Commission and the Securities Association of China have called on securities firms to develop sound corporate cultures to boost the sustainable and healthy development of China's capital market in recent years.