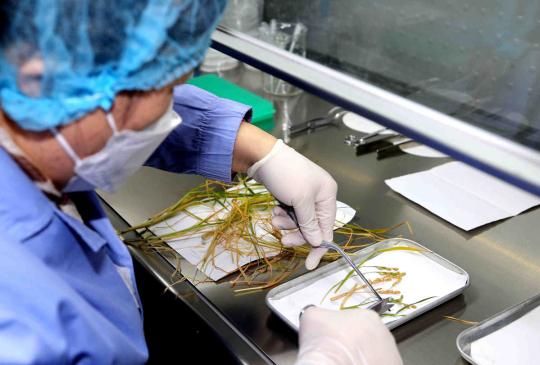 Researcher Zheng Huiqiong handles rice seeds returned from space at the Center for Excellence in Molecular Plant Sciences of the Chinese Academy of Sciences in Shanghai on Monday. (XINHUA)

Chinese astronauts onboard the Shenzhou XIV spacecraft have returned with the world's first rice seeds produced in orbit, a feat that allows scientists to probe the effects of microgravity on rice growth and find a sustainable food source for long-term space explorations.

On Sunday night, Chinese astronauts Chen Dong, Liu Yang and Cai Xuzhe touched down at the Dongfeng landing site in the Inner Mongolia autonomous region, according to the China Manned Space Agency.

They were in orbit for 183 days, during which they oversaw the completion of China's Tiangong space station and several life sciences experiments.

One such experiment involved reproducing the entire life cycle of rice for the first time in space, which begins with a seed hatching into seedlings and ends with a mature plant producing new seeds. The experiment began on July 29, and after 120 days in orbit they successfully produced new cosmic grains.

The new seeds, along with other bio-samples, have been delivered to the Technology and Engineering Center for Space Utilization of the Chinese Academy of Sciences in Beijing. They will also be transferred to labs in Shanghai for further research. 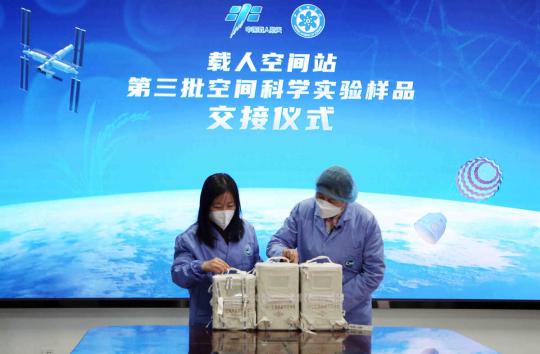 Rice seed samples are handed over to the Shanghai research center during a ceremony in Beijing on Monday. (XINHUA)

The returned package also contained seedlings of Arabidopsis thaliana, commonly known as thale cress. It is a small flowering plant of the mustard family often used by scientists to study mutations.

The institute said researchers would conduct microbiology, cellular and metabolic analysis to better understand how microgravity affects these plants on a molecular level. This would yield key insights on creating new crops that are more adaptive to the space environment.

Zheng Huiqiong, a researcher at the Center for Excellence in Molecular Plant Sciences of the Chinese Academy of Sciences, said seeds are crucial for growing new crops and supporting humanity's long-term survival in space.

Thale cress, rapeseed, peas and wheat were the only plants for which scientists have reproduced their entire life cycle in space, she said, adding scientists can now include rice, which is a staple food for millions of people on Earth, on the list.

While more research is in the pipeline, Zheng said scientists have already noticed several interesting differences between rice grown on Earth and that grown in space.

For instance, the flowering period for the space rice begins slightly earlier than rice planted on Earth. Flowering is a crucial stage for plant reproductive development.

The stems for the space rice are also looser, with the dwarf rice variety becoming shorter while the tall shoot rice variety experiencing no change in height, she added.