What does the global economy look like under the COVID-19 pandemic? Which country enjoys the fastest economic recovery? What's the relationship between epidemic control and economic development? Cloud River Urban Research Institute answers these questions as it looks into the figures of major countries as well as Chinese cities.

1. China is changing the world landscape with its continued economic development

In 2021, the world economy recovered sharply from the slump caused by COVID-19, registering a 6% growth rate in its total GDP.

As Figure 1 shows, the top 10 countries by nominal GDP in 2021 were the US, China, Japan, Germany, Britain, India, France, Italy, Canada and South Korea. Amid global economic rebound in the second year of COVID-19, the nominal GDP of the top 10 countries registered an average growth rate of 5.7%. Notably, China and India recorded a GDP growth of over 8%.

The world in 2021 witnessed three waves of COVID-19 outbreaks. At the beginning of the year, COVID-19 that has spread across the world since 2020 seems to be slowing down. However, the Delta variant of the virus began to spread further across the world as the pandemic reached its first peak in April and second wave of peak in August. Though the virus seemed to be subsiding afterwards, the new Omicron variant identified in South Africa has sparked explosive growth in new confirmed cases. As a result, the total number of infections around the world reached 210 million in 2021, including 2.56 million killed by the disease, bringing the mortality rate to 1.7%, which was slightly lower than 2.2% in 2020. In 2021, China successfully controlled the pandemic thanks to its dynamic zero-COVID policy. Last year, China controlled the total number of COVID-19 infections below 15,000, with only 2 deaths reported, bringing the mortality rate of COVID-19 in the country to 0.01%.

"Faced with complex and severe world situations and challenges from the COVID-19 pandemic in 2021, China coordinated epidemic control and economic development as the country's economy continued to recover," Ming Xiaodong, former first-level inspector of the Department of Development Planning of the National Development and Reform Commission and former minister-counsellor of the Chinese Embassy in Japan. "The country managed to meet its development target with its total GDP surpassing 110 trillion yuan."

Professor Zhou Muzhi, head of Cloud River Urban Research Institute, said China's data in epidemic control and its economic figures have proved the success of the country's dynamic zero-COVID policy. Since 2020, China has been changing the global economic landscape with its continued growth. 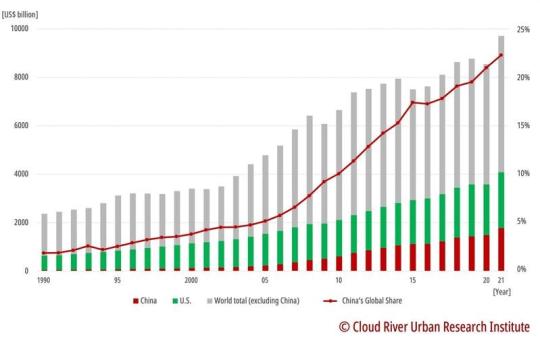 "China's continued economic growth has made the country a major economy nearly compatible to the US," said Zhou. "In 2021, China and the US together accounted for 42% of the world economy, a share similar to the rest of the top 25 countries combined."

In 2021, the top 5 Chinese cities in terms of GDP were Shanghai, Beijing, Shenzhen, Guangzhou and Chongqing as they enjoyed an overwhelming lead compared to other cities. They were followed by Suzhou, Chengdu, Hangzhou, Wuhan and Nanjing.

According to Ming, the top 10 cities in terms of GDP in 2020 all secured their places in 2021, and they all demonstrated new features such as accelerated growth, regional coordination and increased share in the overall economy of the country. In terms of growth rate, the top 10 cities rebounded from the relatively slow growth of below 4% in the year earlier. Except for Shenzhen and Nanjing, which reported a growth rate of around 7%, other eight cities all grew by over 8%, providing a solid foundation for the stable and rapid growth of the country's overall economy. Notably, the city of Wuhan had managed to balance development and epidemic control and made up for the losses due to the pandemic as it reported a stunning growth rate of 12.2%, compared to a slump of 4.7% in the year earlier.

Although Tianjin and Chongqing, both municipalities under the direct control of the central government, enjoy unique advantages in terms of the size of population, the total area under their jurisdictions and strong transportation network, first-tier cities like Shenzhen and Guangzhou have already surpassed the two cities with their economic size on par with Beijing and Shanghai, another two first-tier cities.

Ming said, "The top 10 Chinese in terms of GDP are home to the country's industrial innovation, shoulder key missions of building a modern economic system and upgrading regional economic structure, and are key players of international competition and cooperation. In the Chinese path to modernization, they are set to lead other cities in achieving high-level and high-quality development."

Thirty-six central cities, including four municipalities directly under the central government, 22 provincial capitals, five autonomous region capitals, and five cities specifically designated in the state plan, made their way into the GDP rankings of 297 Chinese cities at and above prefecture level. Central cities had a dominant position in the ranking, with nine such cities in the top 10 and 19 in the top 30. 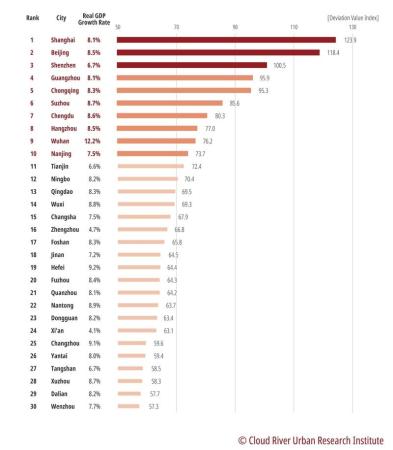 Zhou pointed out that it is these manufacturing hubs that have placed China into the center of the global supply chain.

Cities in the Pearl River Delta, the Yangtze River Delta, and the Beijing-Tianjin-Hebei region dominated the rankings, taking 18 out of the top 30 spots.

Zhou said, the dominance is a result of the concentration of manufacturing hubs in the three city clusters. The Yangtze River Delta and the Pearl River Delta, in particular, have created the most powerful industrial concentration of the global supply chain.

Ming also asserted that GDP of Chongqing, Chengdu, and Wuhan in central and western China was 2.8 trillion yuan, 2 trillion yuan, and 1.8 trillion yuan, respectively, with their GDP combined accounting for 5.7% of the national total. The development of these cities has greatly enhanced the comprehensive carrying capacity and the ability of optimal resource allocation of central cities, and given better play to their roles in regional development.

Xu Lin, deputy head of Cloud River Urban Research Institute and a former official at the National Development and Reform Commission, commented that the research on global and Chinese cities' economic development and pandemic response conducted by Zhou and his team demonstrated China's success in economic recovery while containing the spread of the pandemic in 2021. China not only maintained a robust economy but also kept COVID-19 infections and deaths low. Xu hopes China can continue its winning streak in its control of the Omicron variant, with its science-based prevention and control measures better bolstering economic growth across Chinese cities.