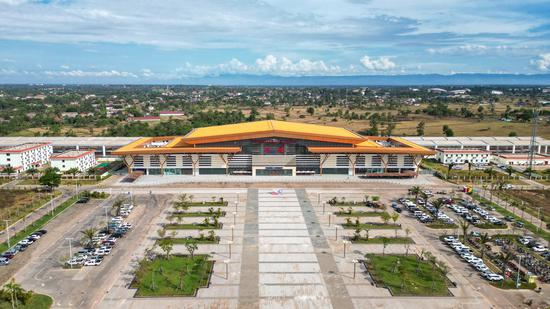 The China-Laos Railway has deepened the friendship between Chinese and Lao staff and provided development opportunities to both countries and peoples.

As a symbol of China-Laos friendship and a triumph over Laos' landlocked status, the railway's Lao section has created more than 110,000 jobs for Lao people since its opening and has drawn the interest of numerous Chinese and local young talents who pursue their professional careers on the railway.

"Because we speak different languages, it was a bit difficult to communicate with each other at first, but our Chinese colleagues are very kind. They patiently teach us without hesitation everything we need to know to do our jobs. That's what impressed me the most," Sida Phengphongsawanh, a 23-year-old lady who worked as a locomotive maintenance engineer, told Xinhua in a recent interview.

She added that working and spending time together have brought her and her Chinese colleagues closer.

Sida was one of the over 1,000 Lao trainees in a series of courses on train driving, scheduling and maintenance and railway operation organized by the Laos-China Railway Co., Ltd. (LCRC), a joint venture based in Vientiane, Laos, and responsible for the operation of the railway's Lao section.

Vilaxay Xayluangsy, a 23-year-old man who works in the company as a train dispatcher, said he had decided to work with the railway because he thought the company could give him a stable job, and the China-Laos Railway could drive the overall development of Laos.

"I was one of the first 600 Lao trainees who have received professional railway theories and on-site practice training since 2020. Personally, it was a great opportunity to improve myself," said Vilaxay.

Vilaxay added that his Chinese colleagues are highly disciplined, hard-working and friendly.

"Chinese are sincere people. They have great empathy with all employees. They taught us everything we need to know about the railway," he said.

"Laos-China railway has shortened the traveling time between cities along the route. It has yielded fruitful outcomes in passengers and cargo transportation since it was launched," said Vilaxay.

Sida and Vilaxay's experiences have attracted more local talents to join the LCRC. Hatsany Vongkhamsao, a new trainee and Vilaxay's college classmate was among them.

"I've been training here for three months. Training in the project made me feel excited and nervous at the same time. Understanding technical words is not easy at all. Luckily, both Chinese and Lao colleagues are very kind. They patiently taught me absolutely everything," the 25-year-old lady said.

The Chinese staff, also called by their Lao colleagues as trainers or teachers, have also gained experience and grown over the past year. On the eve of the opening of the China-Laos Railway, 540 specialists were sent from China State Railway Group covering various sectors of railway management to guide and assist the railway's operation.

Wang Shu, 33, has not returned home since she was sent to work in Vientiane from Kunming in September 2021, but she is satisfied with the progress she has made.

"We also grew up with the China-Laos Railway. We have taken charge of many different positions here, and everyone has grown very fast. For me, I have learned a lot from the all-around exercises. I used to be a train attendant in China, but I have already worked as a railway station conductor and chief train attendant here," she said.

"My work focuses on the training of Lao passenger attendants, and now their vocational skills have improved a lot. Most of them can take up posts independently, and some of the veterans can teach new trainees," Wang said, adding that she was particularly pleased about the progress of her Lao trainees and colleagues.

The champion, 28-year-old Pansay Yiayengva, works as a conductor at Vientiane Station.

"I studied law and international relations in Laos, and then went to China to study business administration for three years. After graduating I worked here," said Pansay.

With a sound educational background, Pansay had many employment options, but she said the experience of traveling by train in China "has been a turning point in my life."

"I found that I really loved trains and I wanted to get a railway job. After graduation and returning home, I went straight to the LCRC to apply for a position," she said. "I like to work on the railway, so I decided to come to work for Laos-China Railway, as well as to grow up with the Laos-China relationship."

Pansay added that she feels lucky to be able to pursue her dream.

The China-Laos Railway will be a symbol of friendship between Laos and China and will bring happiness and prosperity to the people of both countries.

Pansay said that the railway has brought development opportunities to Laos. In addition, she is happy to see that Lao people can have a chance to take a train.

The China-Laos Railway is a docking project between the China-proposed Belt and Road Initiative and Laos' strategy to convert itself from a landlocked country to a land-linked hub.

The electrified passenger-and-cargo railway that went fully operational on Dec. 3, 2021 is also built with the full application of Chinese management and technical standards.