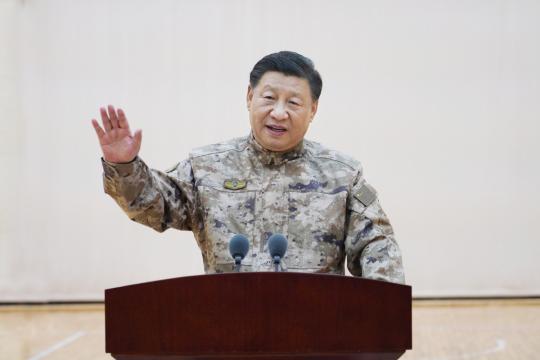 Xi Jinping, general secretary of the Communist Party of China Central Committee and chairman of the Central Military Commission, delivers a speech during a visit to the joint operations command center of the CMC in Beijing on Tuesday. (LI GANG/XINHUA)

Xi Jinping, general secretary of the Communist Party of China Central Committee, called on Tuesday for the nation's military to focus all of its energy and strength on combat readiness to better develop its combat capabilities and resolutely safeguard national sovereignty, security and development interests.

Xi, who is also Chinese president and chairman of the Central Military Commission, gave the instruction during a visit to the joint operations command center of the CMC in Beijing. He is also the commander-in-chief of the center.

With major changes unseen in a century now accelerating, China is also faced with heightened instabilities and uncertainties in its security situation, he said, adding that the nation is also faced with arduous tasks in its military combat situation.

Xi, who was accompanied by other members of the CMC, said the visit was to show the resolve of the new CMC in carrying out the spirit of the 20th CPC National Congress and strengthening military training and combat readiness.

He noted that the congress laid out strategic plans for national defense and the development of China's armed forces, and stressed the need to accomplish goals set for the centenary of the People's Liberation Army in 2027.

He called for the whole military to faithfully implement the plans and requirements of the CPC Central Committee and the CMC, ensure the full implementation of the spirit of the 20th CPC National Congress and strive for greater progress in modernizing national defense and the military.

He urged the whole armed forces to apply the Party's thinking on strengthening the military, implement the military strategy for the new era and uphold combat effectiveness as the sole criterion.

Xi highlighted the important role of the joint operations command center in the implementation of strategic command by the CPC Central Committee and the CMC, adding that the center should remain true to its duties and missions, step up analysis and judgment of the situation of national defense and bolster its response to military combat scenarios.

It is important to enhance innovation in command and operations and build a strategic command body featuring absolute loyalty, prowess in planning combat, high efficiency in command, and boldness in combat and the will to win, he said.