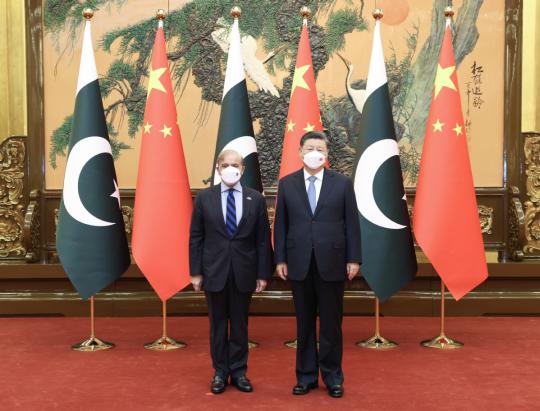 President Xi Jinping meets with Pakistani Prime Minister Shehbaz Sharif at the Great Hall of the People in Beijing on Wednesday. (YAO DAWEI/XINHUA)

China and Pakistan, the "iron brothers" as they are called, have agreed to strengthen high-quality cooperation on massive infrastructure projects, including speeding up construction of the deep-sea Pakistani port of Gwadar, as part of their efforts to upgrade the level of their all-around strategic partnership.

In a meeting with visiting Pakistani Prime Minister Shehbaz Sharif in Beijing on Wednesday, President Xi Jinping said that China will continue to adhere to the fundamental national policy of opening-up and provide new opportunities to the rest of the world, including Pakistan, with its new development.

Both leaders pledged to advance the building of the China-Pakistan Economic Corridor — which is a part of the countries' cooperation on the Belt and Road Initiative — a rail line upgrading and renovation project in Pakistan and the Karachi Circular Railway project, according to a news release issued after the meeting.

They also agreed that China and Pakistan will further strengthen communication, coordination and cooperation on regional and international affairs, uphold true multilateralism and international fairness and justice, and make contributions to promoting world peace, development and prosperity, the news release said.

During their meeting, Xi said that China and Pakistan are "good friends, good partners and good brothers". The two countries have supported each other in recent years amid volatile changes in the international landscape, demonstrating their "ironclad" friendship, Xi added.

China has been giving priority to Pakistan in its neighborhood diplomacy, and it stands ready to upgrade the level of the countries' all-around strategic partnership and step up the building of an even closer China-Pakistan community with a shared future, he said.

Xi expressed China's readiness to synergize its development strategy with Pakistan and advance the construction of the China-Pakistan Economic Corridor with higher efficiency in order to make it an exemplary project of high-quality development of the Belt and Road.

China welcomes Pakistan increasing exports of its good-quality agricultural products to the Chinese market, and it is willing to expand bilateral cooperation in the fields of digital economy, e-commerce, new energy, agriculture, science and technology, and people's well-being, and will continue to provide support to Pakistan within its capability in stabilizing its financial situation, he said.

While asking Pakistan to create a sound business environment, the president expressed his hope that it could provide a reliable and safe environment for Chinese agencies and nationals in Pakistan.

Sharif hailed the development of Pakistan-China relations in past years, saying that deepening the all-weather Pakistan-China strategic partnership is the foundation of Pakistan's foreign policy and the consensus of Pakistani people from all walks of life.

Pakistan firmly adheres to the one-China policy and firmly supports China's stance on the Taiwan question and issues related to Xinjiang and the Hong Kong Special Administrative Region, all of which concern the nation's core interests, he said.

Sharif said that Pakistan stands ready to work along with China to consistently advance the high-quality development of the Belt and Road. He assured Xi that Pakistan will further strengthen security measures to make an all-out effort to protect the safety of Chinese agencies and people in the country.

He expressed Pakistan's full support for the China-proposed Global Development Initiative and Global Security Initiative, and he said that Pakistan-China friendship is unshakable and Pakistan will stand firm with China forever.

Sharif was in China on an official visit. On Wednesday afternoon, Premier Li Keqiang held a grand welcoming ceremony for him at the Great Hall of the People in Beijing.

During their talks after the ceremony, Li expressed his sympathies to Sharif about the severe flooding disaster in Pakistan, and he said China is willing to provide assistance to Pakistan within its capabilities to help it with the post-disaster reconstruction and enhance the country's capacity for emergency management.

He also said that China is ready to maintain the steady operation of flights between the two countries with epidemic control measures in place to ensure people's exchanges are developed in a healthy and orderly manner.

Both leaders witnessed the signing of a series of agreements on bilateral cooperation in the fields of economy and trade, investment, digital economy, culture, law enforcement and security. In addition, the two countries issued a joint statement to boost bilateral cooperation.

Sharif also met on Wednesday with Li Zhanshu, chairman of the Standing Committee of the National People's Congress, the nation's top legislature.