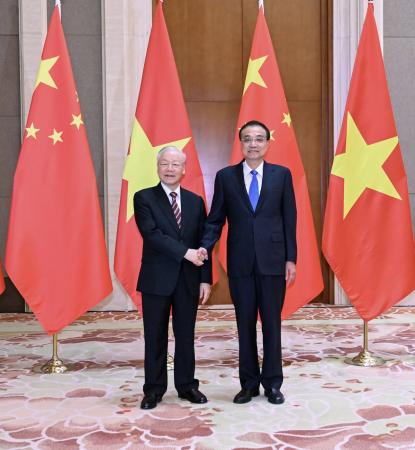 China and Vietnam vowed on Tuesday to further strengthen and deepen their comprehensive strategic cooperative partnership, and reiterated the vital importance of properly handling their differences and upholding peace and stability in the South China Sea.

The two countries made the pledges in a joint statement released on Tuesday during the visit to China by Nguyen Phu Trong, general secretary of the Communist Party of Vietnam Central Committee, who is set to wrap up his official visit to the country on Wednesday.

Both countries agreed to strengthen strategic communication, enhance political mutual trust, deepen mutually beneficial cooperation, carry on their traditional friendship and properly handle their differences on the basis of mutual understanding and respect to uphold the overall development of bilateral ties and regional peace and stability, according to the statement.

During his meeting with Trong in Beijing on Tuesday, Premier Li Keqiang said that China and Vietnam enjoy extensive common interests. He called on the two neighbors to maintain high-level exchanges, strengthen interaction and mutual learning, and deepen synergies between their development strategies.

Noting that China attaches great importance to the development of relations with the Association of the Southeast Asian Nations, Li said that China stands ready to consolidate good neighborliness and friendship with ASEAN countries, advance cooperation with them in various fields for more fruitful results, and jointly uphold peace and stability in the South China Sea to benefit people in the region.

Trong said that his visit to China had demonstrated the unique friendship between the two countries. Vietnam is willing to work with China to implement the consensus reached between them, further enhance mutual understanding, boost partnership for common development and strengthen their comradeship and brotherhood, he added.

Li Zhanshu called for strengthening exchanges between the countries' legislative bodies to make contributions to deepening the China-Vietnam comprehensive strategic cooperative partnership in the new era.

Wang said during his meeting with Trong that the two countries should carry on their traditional friendship and intensify friendly exchanges at various levels to make contributions to building of the strategically important China-Vietnam community with a shared future.