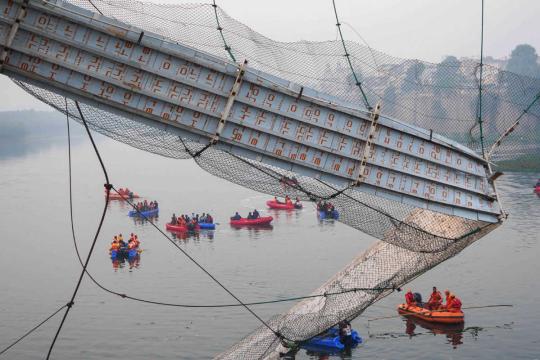 Search efforts continue on Monday after a cable suspension bridge collapsed into a river on Sunday in Gujarat state, India. (Photo/XINHUA)

In his message, Xi said he was shocked to learn about the accident and the heavy casualties caused by it. On behalf of the Chinese government and Chinese people, he extended deep condolences over the death of the victims and expressed sincere sympathies to the injured and families of the bereaved.

Also on Monday, Premier Li Keqiang sent a message of condolence to Modi.

The death toll from the collapse of a newly repaired 143-year-old foot bridge rose to 135 on Tuesday, with search operations entering a third day.

The colonial-era suspension bridge over the Machchu river in Morbi, located in the western Indian state of Gujarat, was packed with sightseers — many in town to celebrate the Diwali and Chhath Puja festivals — when it broke on Sunday evening, sending people plunging about 10 meters into the water.

On Monday, police arrested nine people, including managers of the bridge's operator, Oreva Group, as they began a probe into the incident.