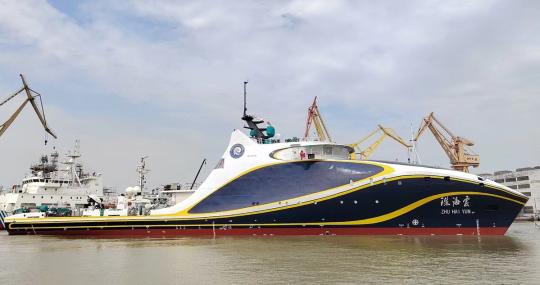 The world's first intelligent unmanned vehicle carrier was launched in Guangzhou on May 18, 2022. (Photo provided to chinadaily.com.cn)

The world's first intelligent unmanned vehicle carrier — named Zhuhaiyun by Chen Dake, an academician of the Chinese Academy of Sciences — was launched on Wednesday in Guangzhou, Guangdong province.

The scientific research vessel is expected to play an important role in China's marine research, expand marine science and help promote the development of the marine economy in the years to come.

The vessel, or IUVC, is expected to be delivered for use before the end of the year. It is owned by Southern Marine Science and Engineering Guangdong Laboratory (Zhuhai) reaches .

The IUVC is 88.5 meters long and 14 meters wide, with a draft of 3.7 meters and displacement of about 2,000 metric tons. It is designed for speeds of up to 18 knots, equivalent to about 33 kilometers an hour.

It has a spacious deck and can carry many unmanned air, sea and submarine vehicles and will be equipped with a range of observation instruments, according to a statement released on Wednesday by CSSC Huangpu Wenchong Shipping Co, which built it.

The vessel can be deployed in a target sea area and carry out three-dimensional dynamic observations, it said.

It will also help to develop high-end marine scientific and technological talent and further improve innovation, the it said.