Beijing getting to grips with latest outbreak 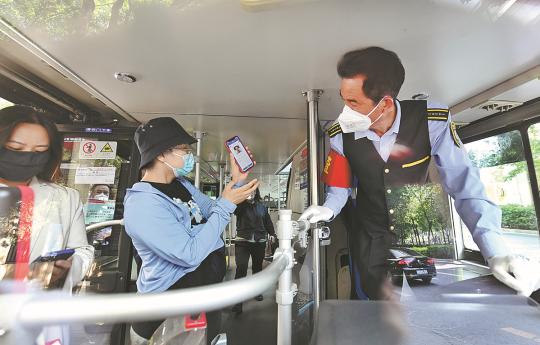 A bus driver checks passengers' health codes in Chaoyang district, Beijing, on May 17, 2022. The city has required some of its buses and subway stations to implement checks on travelers' health codes to help curb the ongoing COVID-19 outbreak. (Photo by DENG WEI/FOR CHINA DAILY)

Nearly half of the patients in the latest COVID-19 outbreak in Beijing had been discharged from hospital as of Tuesday afternoon, a senior official said.

Beijing's two designated hospitals had accepted 1,186 COVID-19 patients as of 3 pm Tuesday since the outbreak began on April 22, and 541 of them had been discharged from hospital or released from quarantine as of Tuesday afternoon, Wang Xiao'e, an official with the Beijing Health Commission, said at a news conference on Tuesday afternoon.

All the patients, aged from 28 days to 91 years old, were admitted to Beijing Ditan Hospital and Xiaotangshan Hospital. The average age of the patients was 43.5.

"At present, 645 patients are still receiving medical treatment at the two hospitals, among whom 106 are asymptomatic carriers, 472 are with mild symptoms, 66 are with normal symptoms and one is in critical condition," she said.

According to the commission, the patient in critical condition has other chronic diseases.

"In the past two days, there has been a growing trend in the number of patients having been discharged from the hospital," she added.

In order to take good care of the elderly and young patients, in the light of the fact that there were many family infection clusters during the outbreak, the hospitals have provided an inpatient ward for each family for their convenience.

Even though Beijing has reported dozens of daily cases in recent days from both controlled zones and in mass community testing, there is good news.

On Tuesday, Beijing redesignated four communities in Chaoyang district from being locked-down zones to controlled zones, according to Xu Hejian, spokesman for the Beijing city government.

At the same time, dozens of zones in Chaoyang had control measures lifted on Tuesday, and residents will be asked to follow the same regulations as others in the district including taking nucleic acid tests, working from home and health monitoring, he said.

Beijing reported 56 new locally transmitted COVID-19 cases between 3 pm Monday and 3 pm on Tuesday, bringing the total number of infections to 1,169 since April 22.Fifteen districts are involved, according to Pang Xinghuo, deputy director of the Beijing Center for Disease Prevention and Control.

"Of the new infections, 47 were reported in controlled zones, and nine were found from mass nucleic acid testing at the community level," she said. "Forty-four new infections among the 56 cases were related to recent clusters."

Beijing has reported four clusters involving a market, a subway renovation project, a bus station and a branch of a logistics company, which has resulted in more than 100 infections.

"Hidden transmission risks still exist at the community level and the chains in the city are not yet completely cut," Pang said.

In order to find the potential risks at an early stage, Beijing started another three rounds of tests in 12 districts from Monday to Wednesday.

Of all 1,169 cases during the latest outbreak by Tuesday afternoon, Chaoyang district had registered 392 cases, followed by Fangshan, which had reported 327 cases. Haidian had reported 125 cases and Fengtai had reported 123 cases.

As of Tuesday, Beijing had 17 high-risk areas for COVID-19 and 29 medium-risk areas.