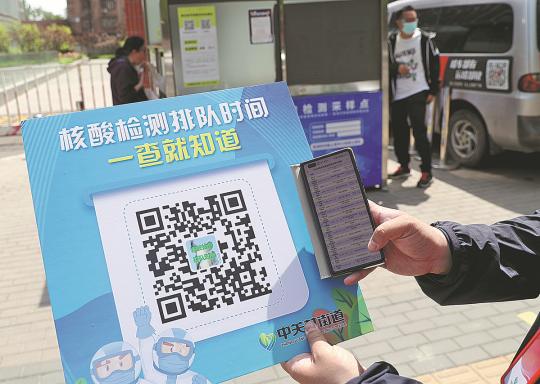 A resident scans the code of a mini-program that shows the waiting times of COVID-19 testing sites nearby for people to save time in Zhongguancun, Beijing, on May 17, 2022. (Photo by ZOU HONG/CHINA DAILY)

A new mini-program in WeChat is relieving people from the pain of long queues at nucleic acid testing sites in Beijing's Zhongguancun, a subdistrict renowned for its high-tech companies and also known as China's Silicon Valley.

The mini-program, designed by the Institute of Automation at the Chinese Academy of Sciences, became available to the public via WeChat on Monday. It shows the locations of testing sites, site testing window numbers, opening times, the real-time number of people in line and estimated wait times.

Community workers at the sites are responsible for updating the number of people in line in the mini-program every 15 minutes.

Waiting in line for a nucleic acid test used to be an hour-long task in some more densely populated areas in Zhongguancun.

"There were usually hundreds of people lining up at the site near my company building because residents and people working in the vicinity all came to that site," said a man surnamed Qi who works at a science institute in the subdistrict.

Due to his work, Qi needs to get tested before noon each day so that he can get the result back by the afternoon in order to arrange the following day's work.

"I can't choose my time to do the test, but now with the mini-program I can select a site with fewer people waiting.

"I found out about the mini-program from a WeChat group and used it to find a site about 1 kilometer away from my company. Now I can arrive and get tested within just a few minutes," he said.

The mini-program showed that on Tuesday in Zhongguancun there were 62 sites located across all the major communities and subway stations. The number of sites changes according to demand. It showed that each window can conduct tests for 150 people in an hour.

Li Bingduo, director of Zhongguancun's public security office, said that despite there being enough sites and a quick testing process, efficiency is still low. That's why they came up with the idea for the mini-program.

He said many testing sites were open and they posted the locations on notice boards in communities, but certain sites were still often overcrowded while others had few visitors.

"Waiting in long lines may interrupt people's work and students' online classes. The problem has to be solved by smoother communication channels.

"Otherwise, residents randomly choose nucleic acid locations and time periods, resulting in the uneven distribution of crowds. Sites with more people have to be equipped with more manpower and material resources and potential safety hazards loom when people gather in large crowds."

Li's team put out a request to see if any company in the subdistrict could find a solution to this problem－and the Institute of Automation took up the baton.

Wen Dayong, an associate researcher with the institute, and two of his colleagues completed the mini-program by Monday after only receiving the task on Friday night.

"We burned the midnight oil to get the program done. We wanted to make it available to the public as soon as possible," he said.

He said that other neighborhoods in Beijing haven't used this kind of mini-program yet. However, the mini-program utilizes just a basic mechanism for timely information sharing and it is not a particularly complicated thing to develop.

"According to the relevant needs, we will update the mini-program to make it more user-friendly," he said.