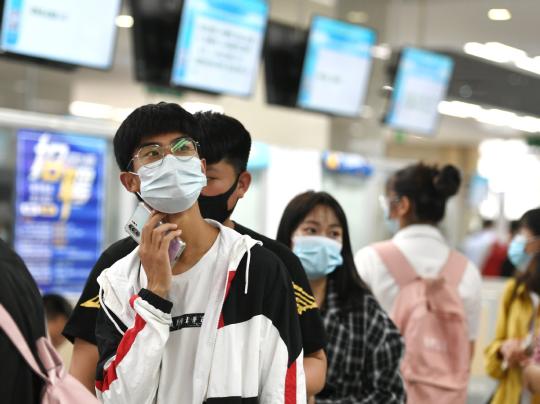 As graduation nears, university students look at company profiles and available positions at a job fair in Nanjing, Jiangsu province, on May 16, 2021. (Photo by Yang Suping/For China Daily)

About 25.6 percent participants said they would choose to work in second-tier cities and 9.3 percent would like to return home after graduation.

Salary and welfare benefits, industry development prospects and corporate recognition are the three most important aspects for the new college graduates, 81.9 percent of whom are confident they'll find good jobs.

"When I look for a job I value personal interests and career development prospects most," said Yang Zhe, a recent graduate from China University of Petroleum, Beijing.

Yang Zhe likes to work with students and has accumulated work experiences in relative fields, so he's focusing on finding a student counsellor position despite the job being a different subject than what he majored in at the university.

Liu Xu, who is about to graduate from a university of science and technology, prioritizes area of study when looking for a job.

The job content does not have to be very familiar, but it needs to align with the major, Liu said, so that it's easier to excel.

The students are graduating during the first year of the 14th Five-Year Plan and the starting point of the Second Centenary Goal, so they're advised to learn about the country's macro policy and base their job choice on the country's high-quality development.

Seizing opportunities in the sunrise industry and working in industries with growth and development prospects helps university students better realize their value, enhance employment stability, improvement and quality, said Wang Ting, a professor at the Business School of China University of Political Science and Law. Wang is also director of the university's Human Resource Development and Management Research Center.

In the past two years, the country has launched a series of policies to stabilize and ensure employment, which in turn has eased the employment pressure to some extent. More effective and proactive measures taking into account the short, medium and long term goals are expected to be formulated by different levels of governments, Wang said.

The country also needs society, the government, colleges and universities, enterprises, graduates and their families to work together and tackle the challenge, Wang said.