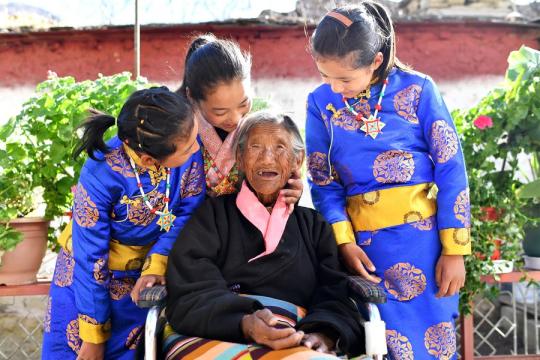 Life expectancy in the Tibet autonomous region rose last year to a record 72.19 years－a giant leap from 1951, when average life expectancy was only 35.5 years, according to the region's government.

In 1951, the harsh environment of high-altitude Tibet made life a day-to-day struggle. Good medical care was a rarity, mothers and infants died at a high rate, people's diets were narrow and unbalanced, and even a minor illness could result in death.

With its peaceful liberation seven decades ago, Tibet embarked on a new path and it would never return to the ways of the past. And this journey has improved the lives of its people.

According to Xinhua News Agency, in 2020 people in Tibet were expected to live 71.1 years on average, meaning a full extra year had been gained in a short span.

Penpa Butri, a 61-year-old woman from Shigatse, told of her mother dying at age 38 because of poor medical care.

"She had an oral disease since she was a child, but healthcare conditions were poor at that time, and her family's conditions were miserable. She couldn't receive good treatment," said Penpa Butri.

Before 1951, there were only three small and shabby government-run institutions of Tibetan medicine and a small number of private clinics. Now, Tibet has a full system covering regular medical services, maternity, child care, disease prevention and control, and Tibetan medicine and therapies.

According to the region's Health Commission, Tibet now has 1,661 health institutes and 172 hospitals, including 14 hospitals above the level of Grade 3.

More than 400 severe diseases can be treated within the region.

Tsering Pedron, a senior Tibetan physician from the Ngari People's Hospital in Ngari prefecture, said the increase in people's life expectancy in Tibet can be attributed to good policies at all levels of government, as well as personal health awareness and technology.