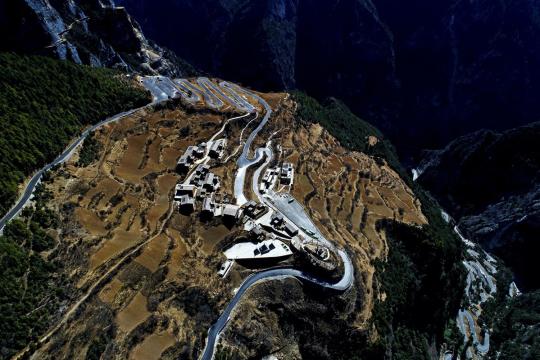 In an aerial view, Bala village, sitting at the foot of Gezong Snow Mountain in the Diqing Tibetan autonomous prefecture in Southwest China's Yunnan province, and the winding road leading to it are clearly seen. (Photo provided to chinadaily.com.cn)

The prefecture also plans to open more expressways and new electric multiple-unit train in the coming year, facilitating the connection within the prefecture as well as with neighboring provinces, according to Li Zhongming, deputy head of the prefecture's transportation bureau.

Diqing has been a key transportation hub to Tibet autonomous region throughout history. Located in the southeast edge of the Qinghai-Tibet Plateau, the prefecture enjoys complicated landforms from high mountains to deep gorges, making transportation very difficult in the past.

Li said all 29 townships and 193 villages of the prefecture have been connected by asphalt roads and public buses today. The first EMU train linking Shangri-la, the prefecture's capital city, and Lijiang, a popular tourist city, is expected to run next year and the expressway linking the two cities is scheduled to be completed in August.

The prefecture also plans to start in October the building of expressway connecting Shangri-la and Xichang city in Sichuan province, he said.

"Our statistics show that about 80 percent of the self-driving cars coming to Diqing are from Sichuan and Chongqing, which are more economically-developed. So when this road opens, it will be much easier for Diqing to integrate into the Sichuan-Chongqing economic zone and it would be a strong driving force for local tourism," he said.

The expressway from Shangri-la to Lijiang now cuts middle-way at a town called Xiaozhongdian in the Diqing Tibetan autonomous prefecture. The section was completed in late 2019, marking the first expressway built in Yunnan's Tibetan areas.

Xiaozhongdian is also a popular tourist spot famous for its vast variety of flowers. Although the COVID-19 pandemic has affected tourism last year, the local residents have still benefited from receiving a number of tourists from Sichuan province.

Tashi Phuntsok, 34, a resident in Lianhe village of Xiaozhongdian town, makes a living by offering meals to visitors at home, transporting cargo and planting crops. He said the improvement of the road helped introduce quinoa to the local farmland which has higher economic value, compared with the traditional potato and qingke barley. By selling quinoa to towns, he can now earn an extra 10,000 ($1,546) to 20,000 yuan and his total income a year can reach more than 100,000 yuan.

The Yunnan-Tibet Highway is another major road in Diqing's transportation network because it serves as a key route into Tibet. In ancient times, the road section in Diqing prefecture was no more than a dirt path where the only transport was horses.

The construction of the highway's Diqing section kicked off in 1956 and finished in 1959. Yerba, 87, who lived off the highway in Benzilan town and offered guide to the construction workers with his father, said it took great efforts for the 3,000 or so laborers to pave the road.

At a time without machinery, all workers used shovels and wheelbarrows to dig a road out of dense forests, he said.

The road opened to traffic in December 1959 and Yerba said when the first big truck drove slowly onto the road, villagers who saw it from afar took it as some huge bizarre animal and they went back home to bring hay to the vehicle.

"Because at that time the only moving creature that carry cargo was horse. Nobody had seen a vehicle before," he said.

The road was paved by asphalt and concrete in 2002 and widened and upgraded into a national highway in 2011. Yerba said before the completion of the road, the only transport they had was horse and if someone fell sick, local people had to carry a stretcher and walked three days to Shangri-la, the prefecture's capital city, to see a doctor.

"Now it takes only three hours by car. We have far fewer deaths today and people live a very happy life," he said.