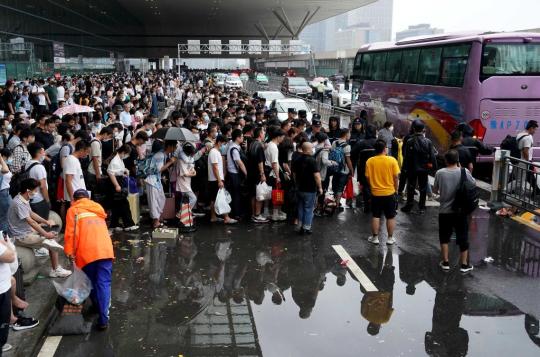 Stranded train passengers line up to board a bus at Zhengzhou East Railway Station in Zhengzhou, Henan province, on Wednesday. (Photo: LI AN/XINHUA）

Thousands of soldiers, firefighters sent to flood-hit areas of Henan province to assist in relief effort

President Xi Jinping has urged all-out efforts to carry out flood prevention and rescue work to protect people's lives and property, requiring officials at various levels to work on the front line to speedily mobilize all available resources.

In an instruction released on Wednesday, Xi mentioned the heavy rains that hit some regions in the past few days, which have caused flooding in Zhengzhou, the Henan provincial capital, and other cities. The water level of some rivers in the area has risen above the alert level, some reservoirs are at risk of collapse, rail services have been suspended and flights canceled.

So far, the rainfall that has hit Henan since Friday has left at least 25 people dead and seven missing.

People affected by the rainfall should be resettled in a proper way and every effort should be made to reduce deaths and injuries as well as property losses to the greatest possible extent, said Xi, who is also general secretary of the Communist Party of China Central Committee and chairman of the Central Military Commission.

The State Council also called on Wednesday for the mobilization of rescuers and the sending of funds and materials to support disaster relief in Henan, according to a news release from an executive meeting of the State Council presided over by Premier Li Keqiang.

In addition to intensifying patrols on rivers and reservoirs to identify safety hazards, local governments should also ramp up early warning, step up precautionary measures to ensure people's safety and minimize losses, the news release said.

About 5,700 soldiers, armed police officers and militia personnel had been mobilized to support the disaster relief work in Henan as of Wednesday afternoon, according to the Central Theater Command of the PLA.

About 1,800 firefighters have also been sent by the Ministry of Emergency Management from other regions to disaster-stricken areas in the province.

Torrential rains since Friday in Henan have affected over 1.2 million residents in the province and forced the relocation of more than 160,000 people, according to the province's Department of Emergency Management.

Direct economic losses caused by the downpours have exceeded 542 million yuan ($83.8 million), Xu Zhong, an official from the department, said at a news conference on Wednesday.