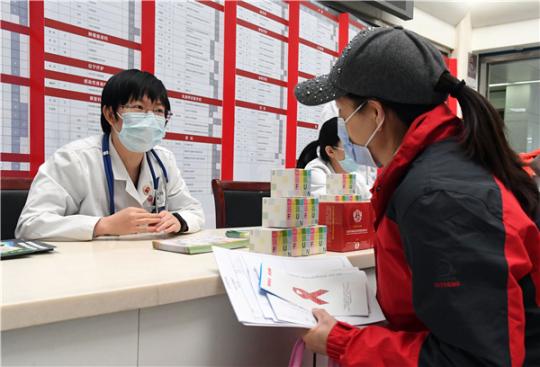 A medical professional with Beijing Haidian Hospital introduces material on AIDS prevention to a visitor during a free consultation event in Beijing on World AIDS Day on Dec 1. [Photo/Xinhua]

China witnessed significant drops in new cases of nearly all major infectious diseases last year, with the number of new HIV/AIDS infections seeing its first year-on-year decline in a decade, according to an annual health development communique released by the National Health Commission on Monday.

The number of viral hepatitis cases dropped by 11.5 percent year-on-year, with tuberculosis cases down by about 13.6 percent, the communique said.

The two diseases were the most prevalent among all 40 notifiable contagious illnesses.

Experts said previously that COVID-19 disease control measures, such as keeping social distance, wearing masks and washing hands regularly, can also play a role in curbing the spread of many other viruses.

As the pandemic has caused a sharp reduction in international travel, imported infections of dengue fever and malaria－whose domestic spread has been largely eliminated－dropped by over 96 and 57 percent respectively last year.

China reported about 62,170 HIV/AIDS infections last year, down by more than 9,000 from 2019. But HIV/AIDS remained the deadliest infectious disease, with more than 18,800 people dying of AIDS-related illnesses last year, the communique said.

COVID-19, which was added to the list of notifiable infectious illnesses in January last year, led to 87,071 infections and 4,634 deaths in 2020, with the data including imported cases detected on the Chinese mainland.

The communique said the COVID-19 pandemic also led to a reduction in the number of visits to medical institutions and hospitalizations last year, both falling by more than 10 percent compared with 2019.

It said 12 million babies were born last year, with the ratio of those born as a second child or into even bigger families standing at 57.1 percent, down slightly from 2019.

Ning Jizhe, head of the National Bureau of Statistics, told an earlier conference that the country had seen more than 10 million children born with an older sibling in recent years due to adjustments in the country's family planning policy.