TCM spreads its wings across the globe 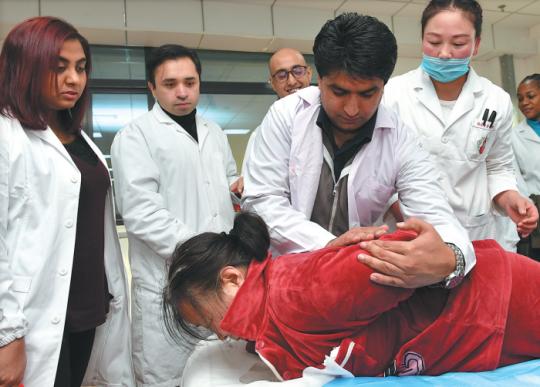 Ancient form of medicine shared with many countries and regions

When Arvin Kuipers asks his patients to stick out their tongue so he can diagnose their ailments, many of them are confused.

The 30-year-old, who practices Traditional Chinese Medicine in Amsterdam, capital of the Netherlands, said: "In TCM, I need to do face and tongue diagnosis. That's strange for people in my country. They ask me, 'What are you doing?'"

Diagnostic methods for TCM are so different from those used in Western medicine that many people in the Netherlands and other countries－even patients with some knowledge of the subject－can have difficulty understanding what is happening.

One elderly woman had been visiting Kuipers occasionally for consultations, but her first encounter with TCM surprised her.

"She had never experienced acupuncture or any other TCM treatment. She came in, and I examined her face and tongue. I told the patient her kidneys were not doing well and that she wasn't getting proper sleep," said Kuipers, who graduated from Beijing University of Chinese Medicine in 2017 and loves Chinese culture.

The woman was shocked and asked the doctor if he was spying on her.

"As she had been sleeping very lightly, she thought I was some kind of magician," Kuipers said. "Actually, it was easy to diagnose her condition when I saw the dark rings under her eyes. Her energy levels were also very low at the time."

Kuipers opened his TCM clinic in September, when the first wave of COVID-19 cases in Europe had eased.

Most of his work involves performing acupuncture, cupping and tuina－TCM massage that patients in the West like the most, he said. In some cases, he also prescribes traditional herbal medicines.

Kuipers usually makes a cup of Chinese tea to calm his patients if they are a little nervous of the acupuncture needles. He also explains the meridian system－a key concept of TCM－yin and yang, and other concepts to them, "so that they know a little of what I'll be doing", he said.

In TCM, good health requires balanced yin and yang, so practitioners not only pay attention to a patient's ailment, but also to his or her overall physical condition, Kuipers said. He added that TCM is also a different culture and offers a new perspective, instead of being a curing method.

He has gradually made "a good connection" with his patients as the treatment helps them. More people are visiting his clinic for their pain to be eased, bad skin conditions cured, or when they feel their energy levels are low.

As of early April, when the Netherlands again eased anti-pandemic restrictions, Kuipers had treated more than 200 patients, many of whom come to his clinic every week.

"People in my country are becoming more interested in TCM. It's also very interesting and pleasantly surprising that acupuncture is quite popular－not just among city dwellers but also with people who live in the countryside," he said.