Mushroom and grape cultivation leads to richer future for Xinjiang 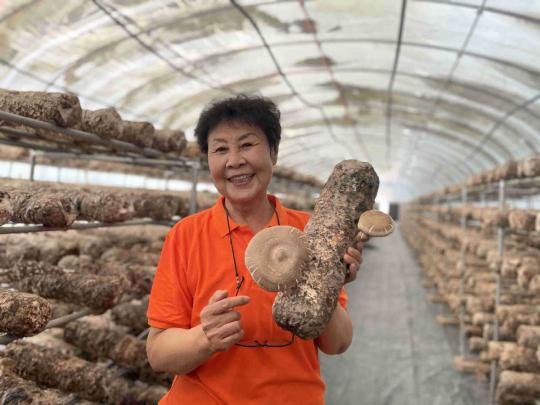 A tall, vibrant woman with short black hair hands visitors the mushrooms she has just picked from the growing kits arrayed on greenhouse shelves, proudly explaining the cultivation process.

The sense of confidence about what she does is such that one can barely tell she is 70 years old.

The woman, Li Ruiqin, wears many hats, including founder of a winery, president of a technology company focusing on edible mushroom cultivation and influential vlogger.

She began to develop a vineyard in the Gobi Desert and run a winery at the age of 47, began to post videos of herself online at 67 and embarked on mushroom production at 69.

It's never too late to start doing what you want to do, is the motto Li applies to her life.

In 1972, the then 21-year-old traveled by bus and train from her hometown, a village in Laizhou in East China's Shandong province, to a village in Yanqi Hui autonomous county in Northwest China's Xinjiang Uygur autonomous region, to marry.

After that, she made a living by successively working on the land and being an accountant for the village.

Following the launch of the reform and opening-up policy in 1978, Li decided to start her own business by opening a brickyard, and later a leather factory, in the 1980s.

"It was in 1997 that the trend of drinking wine suddenly swept across the country, which encouraged me to venture into making it," recalled Li.

The long hours of sunshine in Xinjiang are conducive to growing quality grapes, so Li decided to turn large tracts of wasteland in the Gobi Desert around Qigexing town in Yanqi into vineyards, and in the early 2000s, she founded the XiangDu Winery.

Over the following two decades, the company not only expanded the vineyard to around 2,600 hectares, but also planted more than 3 million trees to protect against the wind.

In 2018, a few young employees encouraged Li to set up a social media account called "Nanny Li in Xinjiang", on short-video platforms Douyin and Sina Weibo. The videos show her picking apricots, mulberries, jujubes and other agricultural produce that abound in Xinjiang, cooking local delicacies such as dapanji, or braised chicken with potato and green pepper, and zhuafan, or fried rice with mutton and carrots, and guiding the viewers around bazaars, museums and other tourist attractions across the region.

The diverse cultural elements she shows and her common touch have garnered nearly 170,000 subscribers on Douyin and more than 260,000 followers on Sina Weibo.

"I know that some people from outside the region might have concerns about Xinjiang. I just want to show the real situation here. Xinjiang is a place that boasts picturesque scenery, diverse cultures and a stable, harmonious social environment," said Li.

Last year, the veteran entrepreneur made another bold move into a new field-mushroom cultivation.

As Xinjiang's Hotan prefecture has an adequate labor force, a climate favorable to mushroom cultivation and an improved business environment, Li decided to found a technology company there to focus on mushroom production. The company has factory buildings covering more than 40,000 square meters and 1,500 greenhouses, and it has become the largest mushroom industry park in Xinjiang involved in the cultivation, processing and distribution of mushrooms.

The company purchases branches cut by fruit growers as the growing medium for the mushroom kits, which helps increase the income of the fruit growers, and employs 1,370 people, considerably stimulating employment in the area.