West can learn from most 'formidable' CPC 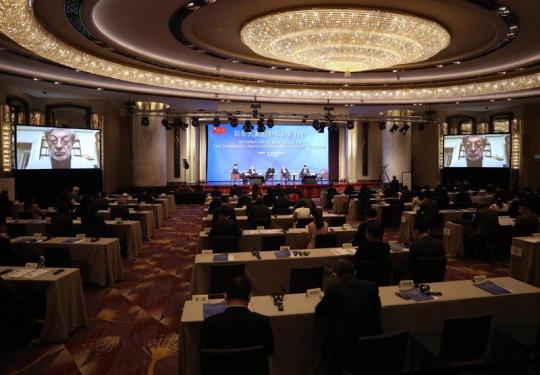 The International Symposium On The Communist Party of China's History of 100 Years is held in Wan Chai, Hong Kong on June 16, 2021. [CALVIN NG/CHINA DAILY]

Foreign experts and scholars on Wednesday said the achievements made by China under the leadership of the Communist Party of China are of great significance to other economies and the West should learn more about the most "formidable" political party in the world.

Making a keynote video speech at an international symposium in Hong Kong on the centenary of the party, veteran political scholar Martin Jacques said the CPC is undoubtedly the most "formidable" and "successful" political party of modern times, citing the remarkable achievements of lifting a poverty-stricken country into becoming the world's second largest economy. Jacques is former senior fellow of politics and international studies at Cambridge University.

"In fact, what the test the West has to address is they don't understand the Communist Party of China," Jacques said.

The scholar called on Western countries to better understand how the CPC operates, and to take a leaf from its success.

Also speaking at the full-day symposium, Jim O'Neill, former chief economist of Goldman Sachs, noted that China's economic achievement under the leadership of the CPC has many lessons for all sorts of economies and societies around the world. China also has much experience to offer with regard to reducing poverty and promoting equality, two key issues which are expected to be highlighted in the post-pandemic world, O'Neill added.

Cross noted that with the nation's help, Hong Kong has been able to solve problems which emerged during the implementation of "one country, two systems". After local fanatics encouraged by hostile forces created chaos in the city and damaged the nation's overall interests, the central authorities enacted the National Security Law for Hong Kong. Cross said it was done in a constitutional, minimalist way that was respectful of Hong Kong's legal norms.

The full-day international symposium, held online and offline, is part of an array of activities to mark the upcoming 100th anniversary of the CPC, which falls on July 1.

It was jointly organized by the Liaison Office of the Central People's Government in the HKSAR and Bauhinia Culture, a Hong Kong-based media group.