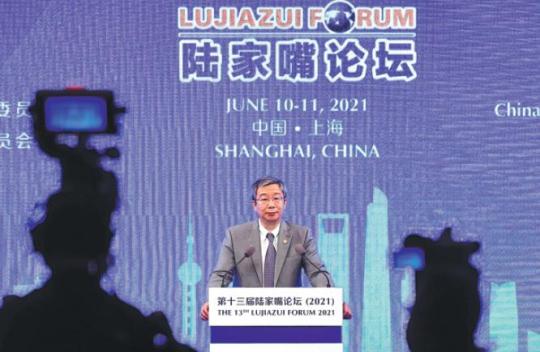 China will strive to maintain a stable monetary policy, ensure that prices remain normal and the economy operates within a reasonable range close to its potential level of output, the central bank governor said on Thursday.

Yi Gang, governor of the People's Bank of China, said the country's monetary policy, which focuses on the cross-cyclical balance between supply and demand, needs to factor in inflation concerns due to an aging population and the transition toward a low-carbon economic growth pattern.

According to Yi, interest rates in China are currently at an appropriate level, but higher than that in most of the major developed economies, though lower than those in developing and emerging economies. China's interest rate reform will continue by taking full advantage of the loan prime rate system, he said.

Yi, who was speaking at the opening of the 13th Lujiazui Forum 2021 in Shanghai, said full-year consumer inflation is likely to grow by less than 2 percent despite the recent surge in global commodity prices.

Global inflation has soared in the short term. But opinion is divided on whether such inflation can last for a long time, said Yi.

"During the COVID-19 pandemic last year, China adopted a normal monetary policy, and the domestic aggregate demand was relatively stable, which was conducive to maintaining the overall price stability," the central bank governor said.

China's consumer price index is likely to rise later this year due to multiple factors like the economic rebound. Factory gate prices, which are indicated by the producer price index, have shown rapid growth this year due to the low base of last year. But it still needs a long time to observe the PPI changes, said the central bank governor.

Domestic inflation, although it was largely due to the low base of last year as a result of the pandemic, will find it difficult to avoid external influences, especially if global commodity prices continue to rise due to infrastructure stimulus measures in the United States and economic reopenings elsewhere, according to Iris Pang, chief economist in China with ING, a Netherlands-based bank.

China's GDP growth rate is approaching the potential growth rate, while the moderate growth of labor productivity and changes in population structure will depress the same, said Yi.

The potential growth rate, which is determined by production factors, productivity growth and the capacity of resources and the environment, is a key indicator of monetary policy formulation. When the actual GDP growth is close to the potential level, it means there is no need of aggressive monetary stimulus, said experts.

By the end of last month, the broad money supply, or M2, increased to 227.55 trillion yuan ($35.5 trillion), up by 8.3 percent from a year earlier. The growth rate was 0.2 percentage point higher than that in April, the PBOC said on Thursday. New yuan loans increased by 12.2 percent on a yearly basis, compared with 12.3 percent in April.

Pan Gongsheng, vice-governor of the PBOC and head of the State Administration of Foreign Exchange, said that the influential factors of yuan exchange rate are complicated, and "two-way" fluctuations of the Chinese currency will be normal.

Pan warned that as inflation is rising in the U.S., the market is expecting the U.S. Federal Reserve to tighten monetary policy, which in turn will significantly influence the global forex market and cross-border capital flows.