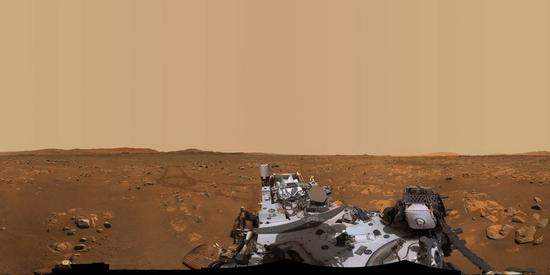 This 360-degree panorama photo taken by NASA's Perseverance rover shows ''Van Zyl Overlook,'' where the Ingenuity helicopter performs its first flights on Mars. It is made up of 992 individual images stitched together, which are taken between April 15 and April 26, 2021. (Photo credit: NASA)

During the first few weeks of this first science campaign, the mission team will drive to a low-lying scenic overlook from which the rover can survey some of the oldest geologic features in Jezero Crater, and they'll bring online the rover's auto-navigation and sampling systems, NASA said in a release late Wednesday.

By the time Perseverance completed its commissioning phase on June 1, the rover had already tested its oxygen-generating MOXIE instrument and conducted the technology demonstration flights of the Ingenuity helicopter, according to NASA.

Perseverance's cameras had taken more than 75,000 images, and its microphones had recorded the first audio soundtracks of Mars.

The science goals of the mission are to study the Jezero region in order to understand the geology and past habitability of the environment in the area, and to search for signs of ancient microscopic life on Mars.

The mission team will identify and collect the most compelling rock and sediment samples, which a future mission could retrieve and bring back to Earth for more detailed study.