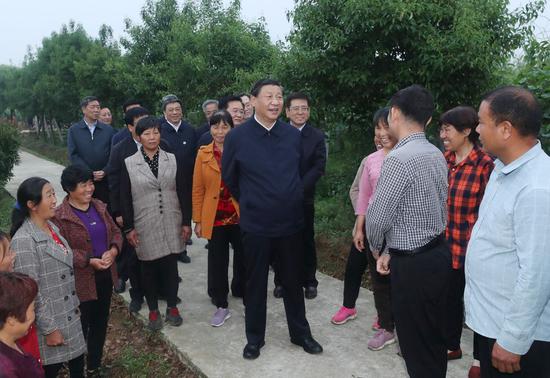 Chinese President Xi Jinping, also general secretary of the Communist Party of China Central Committee and chairman of the Central Military Commission, learns about the resettlement of people relocated because of the South-to-North Water Diversion Project, and measures to develop specialty industries and boost the incomes of resettled residents in Zouzhuang Village, Xichuan County, Nanyang, central China's Henan Province, May 13, 2021. (Xinhua/Wang Ye)

Xi Jinping, general secretary of the Communist Party of China Central Committee, Thursday visited people relocated because of a mega water diversion project and thanked them for their contribution to the country.

Xi made the remarks during an inspection tour in the village of Zouzhuang in Xichuan County of central China's Henan Province.

The South-to-North Water Diversion Project is the largest of its kind worldwide. In six years, it transferred 40.8 billion cubic meters of water from the south to dry areas in the northern regions, benefiting more than 130 million people.

Residents of Zouzhuang are among the people relocated due to the construction of the project.

"I have always paid close attention to the construction and operation of the South-to-North Water Diversion Project and the resettlement of residents," Xi said.

"We very much care about how you live now," Xi said, hailing their spirit of sacrifice and wishing them a better life.

He said the resettled residents deserve the thanks from those who benefit from the water diversion project and people across the nation.